On this day in 1865 the Confederate government authorized the enlistment of slaves as soldiers. For many it’s an opportunity to take a shot at just how desperate the Confederacy had become by this point. It’s true. The military situation was certainly precarious at best and many people had given up hope on independence, but we should keep in mind that they did not know how much longer the war would last. 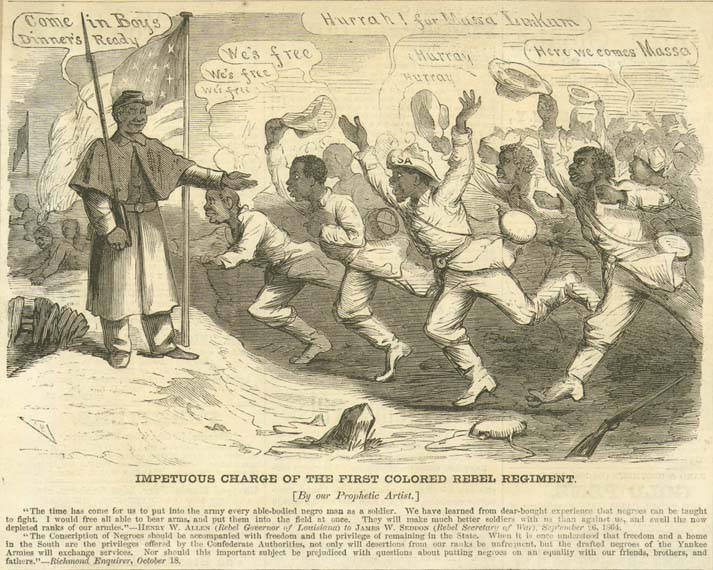 This anniversary is also an opportunity to poke fun at the very idea of a nation at war trying to preserve slavery considering the recruitment of slaves as soldiers. Was it possible to raise a significant number of enslaved men into the Confederate army in 1865? While military recruiters managed to raise a very small number in Richmond, it is impossible to know for sure. That said, we most certainly would have seen additional Black soldiers recruited had the war continued. But this is not really the issue.

My bigger concern is our tendency to frame the debate that led to the Confederate slave enlistment legislation in isolation from the process and debate that took place in the United States in late 1862 and into 1863 over the very same question.

We tend to forget in this moment that neither the United States nor the Confederacy set out to enlist African Americans into their respective armies. For both sides this was to be a white man’s war and the war could have ended at a number of points with only white men in the ranks and slavery largely intact.

A number of factors shaped the debates over the enlistment of Black men in the United States and the Confederacy—most obviously in the case of the latter the fact that it was a slaveholding society attempting to preserve its “peculiar institution.” Despite the support of a small group of abolitionists and Republicans, the Lincoln administration focused on maintaining the loyalty of its four slaveholding states and a population that harbored deeply-entrenched racist views.

Both sides questioned whether Black men could fight and Confederates and white Americans alike feared the implications of a policy that threatened their privileged status. Yes, one side was defined by slave labor and the other had largely embraced a free labor ideology, but both sides shared a similar racial outlook.

Protracted civil wars often lead the feuding parties to places that they did not seek out or even envision at the start. This was the case for both the United States and the Confederacy regarding the question of Black soldiers.

Understanding both enlistment debates and the consequences of their respective policy decisions points directly to the postwar debates over the place of African Americans in a reunited nation.