What If the Civil War 150th Began Where It Ended

This year we mark the 160th anniversary of the beginning of the American Civil War. You probably haven’t thought much about that, but if you are reading this post it is likely that you have thought a great deal about the legacy of the Civil War over the past few years.

It has me wondering how the Civil War 150th would have been different had it began where it ended. It seems so long ago, but the end of the Civil War sesquicentennial overlapped with the murder of nine Black churchgoers at the Emanuel African Methodist Episcopal Church in Charleston and calls to remove Confederate flags and monuments from public spaces. That was just the beginning.

Looking back, the Civil War sesquicentennial seems so quaint in light of the past few years. I remember some of the earliest conversations among members of Virginia’s sesquicentennial committee—which proved to be the most active—that focused on ensuring that this commemoration would be inclusive and focus on history rather than politics.

One of the most controversial questions was whether battlefield reenactments should be staged as they had been during the centennial commemorations. In Virginia, a Republican governor was forced to apologize for a proclamation that framed the Civil War without mentioning slavery and emancipation. This is what passed for controversy before 2015. 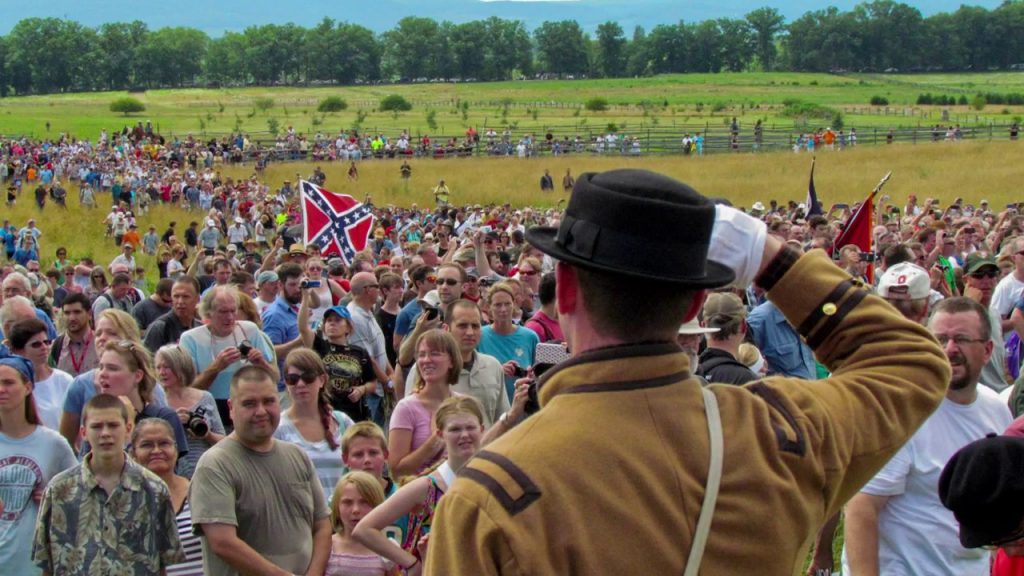 The 150th anniversary of the battle of Gettysburg (July 2013)

In his eulogy address for State Senator and Reverend Clementa Pinckney, President Obama gave voice to the overall theme that many commemorative events between 2011 and 2015 embodied. He argued “that the cause for which [Confederates] fought—the cause of slavery—was wrong, the imposition of Jim Crow after the Civil war, the resistance to civil rights for all people was wrong.” One hears echoes of the National Park Service’s theme from the 150th: “From Civil War to Civil Rights.”

Little did we know that within a few short years we would witness a president defending white nationalists rallying in Charlottesville to defend a monument to Robert E. Lee. And who could have anticipated the sight of one of Donald Trump’s supporters walking through the Capitol Building with a Confederate flag as part of an insurrection to prevent Congress from certifying an election that he lost.

What if the Civil War 150th overlapped with the Charleston murders in 2015; the “Unite the Right” rally in Charlottesville in August 2017; and the police killing of George Floyd in May 2020, which has led to the removal of more Confederate monuments than at any previous moment in time.

This raises more questions than it does answers. Arguably, more Americans have been focused on the history and legacy of Civil War over the past five years than at any point during the sesquicentennial. It goes without saying that this level of focus is not without its challenges. How would commemorative events have been different? Would state committees and other institutions have just thrown their hands in the air and abandon plans to mark the sesquicentennial rather than risk the inevitable political backlash from their constituents? I just don’t know.

Even without any firm answers this little thought experiment can help us to focus on our responsibilities as historians, public historians, and educators during moments of heightened public awareness surrounding our shared collective past. How do we leverage these moments in ways that both educate about the past and promote healthy public discussion? Can we or should we ignore current political/social/cultural debates at historic sites and other venues in hopes of addressing purely historical topics? Does this distinction even make sense in 2021 and with everything that has transpired over the past few years?

What are your thoughts?