Update: The chair has been returned undamaged. I certainly didn’t see this one coming.

This week a group in Selma, Alabama turned a monument honoring Jefferson Davis into a toilet. Now there is a sentence I never thought I would write on this blog. 🙂

We’ve seen headlines such as “Ransom Note Threatens to Make Confederate Monument a Toilet” and “$500,000 Confederate Chair Stolen From Cemetery, Used As Toilet, Will Be Returned Tonight“—headlines that I never thought I would read in connection with the ongoing dispute over Confederate monuments.

Earlier this week a group calling itself “White Lies Matter” sent a ransom note to the United Daughters of Confederacy threatening to deface the Jefferson Davis Memorial Chair that has been located in a Selma cemetery since 1893.

[Interview with a Member of White Lies Matter]

The group demanded that the UDC hang a flag outside its headquarters this weekend to mark the anniversary of Robert E. Lee’s surrender at Appomattox. Failure to do so would lead to the chair being returned with a hole in the seat—effectively turning it into a toilet.

With no response from the UDC the group decided yesterday to move ahead with their plans to alter the monument. Photographs have been sent to news outlets showing a man apparently using the chair as a toilet. Coordinates have reportedly been sent to the UDC that pinpoint where it can be recovered. 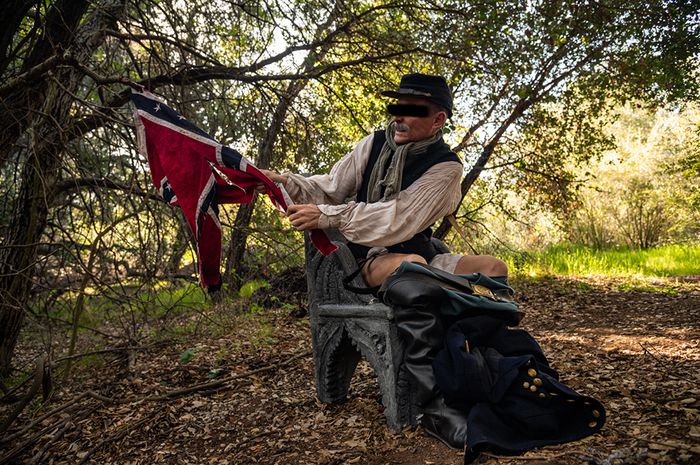 With that it looks like this bizarre story has been brought to a close. This will likely be remembered as the only example of a ransomed Confederate monument, but in many ways the story reflects where we are in this ongoing debate about monuments and memory.

It should be remembered that relatively few of the roughly 100 Confederate monuments removed over the past year have been pulled down or intentionally damaged by activists. The above photograph should be viewed alongside the images of the Jefferson Davis statue and Confederate soldier statue in Raleigh being pulled down last summer.

Taken together they highlight the pent-up frustration over the continued presence of these monuments in prominent spaces and their perceived connection to the history of racism and white supremacy in this country.

The “kidnapping” of the chair can also be seen as another example of how sites of Confederate memory have been appropriated by activists. Arguably, the most powerful example of this is the transformation of the Robert E. Lee monument in Richmond by local citizens over the past year. Regardless of what the UDC chooses to do with the returned chair, its history and meaning has been changed forever by the events of this past week.

Although the chair was located in a cemetery and not in a prominent public space, this story also reflects frustration with state laws (including Alabama) that prevent local communities from making decisions about whether to remove or relocate Confederate monuments.

The ransom is also a reminder of the UDC’s diminished influence. It is very unlikely that the UDC was ever going to engage the individuals responsible for this spectacle. They have largely retreated from public engagement and over the past two decades have ceded the debate over Civil War memory to the Sons of Confederate Veterans.

Finally, let’s not forget that this is a local story. Selma has a complicated and rich history. A former slave-trading hub on the banks of the Alabama River, it remains a  poor and predominantly African-American community. In 2000 city residents elected its first Black mayor.

You can still walk across the Edmund Pettus Bridge to commemorate the bravery of civil rights activists on “Bloody Sunday.” It is also the home of a very active group committed to the continued celebration of the Confederacy.

Old Live Oak Cemetery, where the chair was located, is the site of a relatively new bust of Nathan Bedford Forrest that has been the subject of controversy in recent years. In 2012 the bust was stolen and never returned, forcing the group “Friends of Forrest” to commission and dedicate a new one in 2015. [This story is detailed in Connor Towne O’Neill’s excellent book, Down Along With That Devil’s Bones.]

Regardless of what the UDC chooses to do with this chair, one thing is certain. No amount of disinfectant is going to return Davis’s chair or the Confederacy’s Lost Cause to its previous place of glory.