Complicating Our Understanding of Confederate Conscription 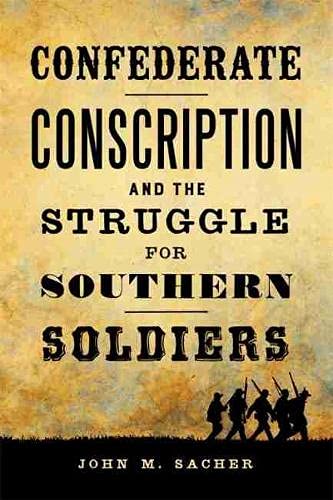 Rather than view conscription narrowly as the result of the legislative debate in the Confederate Congress in 1862, Sacher shows how it evolved in response to the progress of the war and challenges on the Confederate home front. Rather than reflect the Confederacy’s ‘lack of will’ this close examination shows that civilians and the military, with few exceptions, supported conscription as necessary to win the war. The discrepancies between the populations of the two warring sides were clear to people across the board.

According to Sacher, Jefferson Davis and the Confederate Congress listened to critics and worked to make the necessary exemptions that would help to maintain productivity on farms and shops as well as safety on the home front. Rather than see resistance to conscription as a direct sign of Confederate disloyalty, Sacher argues that it reflects the complicated and often conflicting allegiances that pulled civilians and soldiers in different directions at the same time.

This point is driven home in connection to the Twenty Negro War, which is often viewed by historians and others as clear evidence of a ‘rich man’s war and poor man’s fight.’ This couldn’t be further from the truth. As Sacher and historians like Joseph Glatthaar have demonstrated, slaveholders were actually over represented in the army. According to Sacher, the law was passed in response to concerns from slaveholders and nonslaveholders alike that their safety would be jeopardized without a sufficient presence in heavily slaveholding areas of the Confederacy.

The overseer exemption remains one of the most misunderstood aspects of Confederate conscription… At face value, the exemption appears to be irrefutable proof that tin-eared planter-politicians callously exploited their nonslaveholding neighbors. The law did engender complaints. however, these complaints tell only part of the story. They do not reflect the fact that the overseer exemption itself tried to balance the army’s need for soldiers with the home front’s need for slave control. Instead of being simply an example of class favoritism, the overseer exemption is actually an example of the almost impossible challenge in trying to create an equitable conscription policy satisfactory to all Confederates. (pp. 73-73, my emphasis)

One of the most interesting chapters in the book focuses on the challenges that enrolling officers faced in carrying out conscription and navigating local and state resistance and interpreting the fine print in the law re: exemptions and substitutions. Readers may be surprised to learn that conscription–however imperfectly–did the job that it was intended to do throughout much of the war. Though the evidence is incomplete, conscription may have added and additional 250,000 men into the ranks, in addition to the roughly 200,000 one-year volunteers that it turned into three-year volunteers in April 1862.

Sacher does, at times, get distracted with the now old debate over whether the Confederacy succumbed as a result of internal factors as opposed to an external interpretation that focuses on battlefield defeat, but this is a minor quibble.

All in all, this is a fine book and one that you should definitely check out.

Next post: Will the Trump Presidency Be Remembered As One of the Worst?

Previous post: Join Us For Film Club at the MHS: Glory