This is a fascinating piece of research that appeared today in The Washington Post. Through a careful investigation of census and other records, it details the number of congressmen and women, who at one point in their careers owed slaves. The results will certainly surprise many of you.

The Post concluded that 1,715 members of Congress were enslavers at some point in their adult lives, including at least one lawmaker who held Native Americans in bondage. Evidence suggests that another 3,166 congressmen did not enslave anyone. The Post could not find enough evidence to reach a conclusion about 677 congressmen. As more information comes to light, The Post will update the database.

The interactive features are incredibly helpful and worth exploring in depth. I can easily see ways to use this in the classroom to teach not only the history of slavery, but its legacy in the very halls of the U.S. Capitol Building. 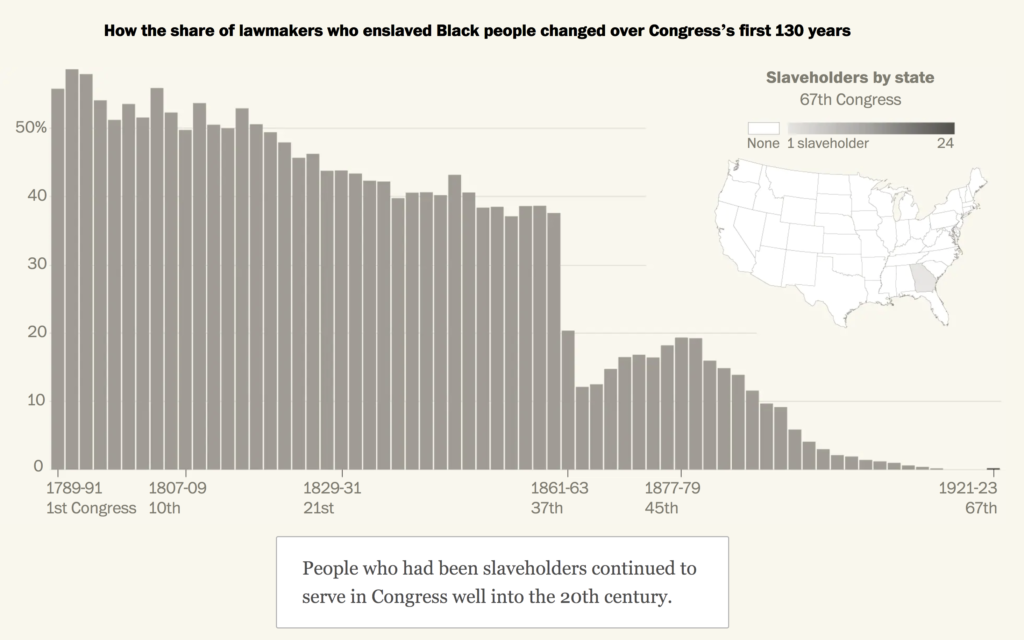 Students can explore the slaveholding interests of congressmen and senators from their own states over time. One of the findings that stands out is the fact that elected officials in D.C., who at time owned slaves, continued to serve well into the 1920s. This is worth having students dig into to better understand the legacy of slavery’s influence directly on legislation throughout the Jim Crow era.

Party affiliation is also worth exploring with students, though I suspect this will also surprise many.

The most common political affiliation among enslavers was the Democratic Party — 606 Democrats in Congress were slaveholders. While the early Republican Party is associated with abolition, The Post found 481 slaveowners who identified as Republicans at some point in their elected careers.

Conservative political hacks like Dinesh D’Souza will likely have a conniption after seeing this, but it is a clear reminder of the ways in which the two parties evolved over the course of the late nineteenth and especially twentieth centuries.

Definitely take some time to read and explore this fascinating piece and thanks to Julie Zauzmer, Adrian Blanco, and Leo Dominguez for putting it together.