Standing Up For History Education 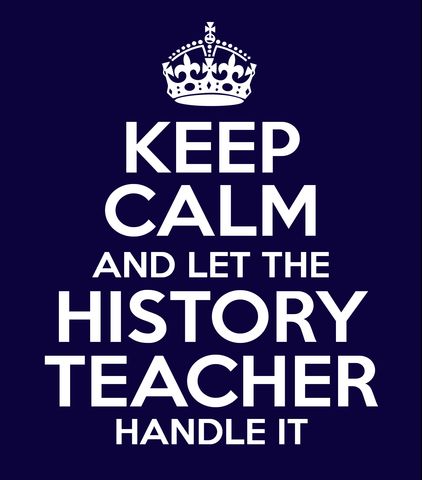 If you had asked me in high school what I wanted to do with my life, the last thing I would have said was a history teacher. I had very little interest in the subject in high school, which was par for the course with my other classes. I can tell you next to nothing about what I learned in my history classes or the teachers who taught me. Let’s just say that overall I was not a very curious or motivated student.

Somehow my life came to revolve around a deep interest in understanding American history and a career teaching it to high school students. I love everything about it. I enjoy teaching the most engaged and intellectually driven students as much as I enjoy those that have zero interest, perhaps because the latter remind me of myself in high school.

An interest in philosophy profoundly shaped my understanding of the classroom and my obligations to my students. More than anything else I want them to learn to think critically about the world around them, to embrace a healthy skepticism about ideas, to listen intently to others, and to draw their own conclusions. The study of history has always seemed to me to be tailor-made for just such an agenda.

Teaching has brought joy to my life as well as a sense of purpose.

I share this to underscore just why I am so concerned about the pending bills and laws passed in states across the country attempting to legislate how history is taught. It is an attempt to manipulate voters by instilling mistrust in our educators and take advantage of the current cultural divide simply to score political points.

A quick perusal of the legislation passed already suggests that they have very little, if anything, to do with history education. They are not reinforcing the importance of critical thinking and interpretation. Quite the opposite, as is the case with the recently passed Florida law:

The history of the United States, including the period of discovery, early colonies, the War of Independence, the Civil War, the expansion of the United States to include its present boundaries, the word wars, and the civil rights movement to the present. American history shall be viewed as factual, not as constructed, shall be viewed as knowable, teachable, and testable, and shall be defined as the creation of a new nation based on the universal principles stated in the Declaration of Independence. (my emphasis)

This statement has absolutely nothing to do with history education. It views students as passive observers who need to be spoon fed statements that are believed to be “factual” and able to regurgitate it on a test. The statement that “American history…shall be defined as the creation of a new nation based on the universal principles stated in the Declaration of Independence” is nothing more than an order from above. It isn’t true or false as a claim about history. It’s meaningless.

I feel just as strongly about those individuals and organizations that are fighting these laws, who appear to be content substituting one myth for another, namely that American history can be reduced to or that the “creation” of the United States can be understood solely based on “systemic racism.” Such a claim is just as misleading and dangerous as the Florida law.

Both treat students merely as political pawns. Both fail to appreciate the importance of the concept of ‘change over time’ and undercut the very thinking and discussion skills that we hope to instill in our students. They undercut the idea that history is complex. Contrary to the Florida law, history is most certainly “constructed” or interpreted. It is constructed over and over based on new evidence and the questions we pose to that evidence. We shouldn’t do anything to get in the way of that.

This is the very foundation of my approach to teaching history and it is this that is currently under assault.