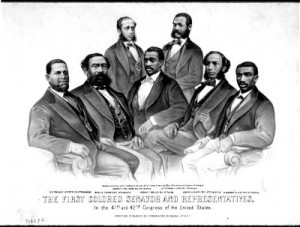 This week I will be teaching Reconstruction. I am putting primary documents together, slides, and segments of movies, including Birth of a Nation and Gone With The Wind. We will analyze both how Americans have traditionally remembered the period and the actual history. It’s always a challenge teaching this section. My approach is to begin by laying out the challenges of Reconstruction for all parties involved and to make clear that the question of the status of the newly-freed slaves and the role of the federal government constituted an immediate problem and one that was not predicted only a few years earlier. I emphasize the steps that African Americans took to secure their freedom even as the Republican party gradually pulled back by the mid-1870’s. This approach is not intended to castigate white Americans for the eventual abandonment of Military Reconstruction, but to reveal the extent to which African Americans were able to engage in political action on the grassroots level and within individual state legislatures. That means on one level the story of Reconstruction becomes a heroic tale of black Americans striving to assert themselves in challenging the racial boundaries to which civil liberties applied.

We will end this section by reading through an article by either David Blight or Ed Ayers. Of course, Blight emphasizes the process by which white Americans shaped their history to the point where it minimized black political action during the Civil War and Reconstruction. On the other hand, given the conflict in Iraq we may read an article by Ed Ayers which explores our collective belief that we can export reconstruction to other parts of the world. I am leaning towards the Ayers article. Perhaps our amnesia regarding the deep-seated racial and political divisions after the Civil War is what allows this administration to shape its foreign policy in a vacuum. Our own experience at reconstruction was less than successful, which raises the question of why we should have any reason to believe that it can be accomplished in parts of the world where the divisions are even more deeply rooted.

Next post: Faculty Chair in Memory of Brian Pohanka