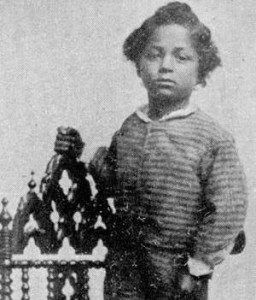 Looks like Brag Bowling and the SCV are going to look elsewhere for a home for their statue of Jefferson Davis and Jim Limber.  I reported on this story a few days ago.  He is rightfully concerned that, given the lack of preconditions attached to the donation of the statue to the American Civil War Museum at Tredegar, they may decide never to display it.  I would suggest, however, that his bigger concern is that they will display it.

As a steward of SCV money, I’m not going to take that risk, where it might not be displayed or it might be made in a way that denigrates the intent of the statue,” he said. “Theoretically, they could take the thing and melt it down. I think Richmond has missed an opportunity to open up the sesquicentennial of the Civil War.

How might the museum display it in a way that “denigrates the intent of the statue”?  Well, they might do what museums do and include an interpretive panel that would give the visitor information about Davis and his view of blacks and slavery or his broader racial outlook.  It might even include information about the antebellum-postwar myth that slavery was a benign institution.  If I were Bowling I would cease to give interviews about this issue and move on.  The problem he is dealing with is the lack of an easy target to use to shape the image of a people/organization whose heritage and history are being attacked.  In this case it’s impossible since the mission of the museum is to tell the story of the Civil War from the perspectives of Union, Confederate, and slave.

Just in case the statue fails to find a home I would like to make a pitch for my classroom.  Next semester I will be teaching a class on memory and the Civil War, which will include an entire section on statues and other public historic sites.  I am planning two field trips, the first through Charlottesville and later to Richmond.   What better way to remember Davis than to use him as a teaching tool in a classroom full of young Virginians.

Give it some thought.

Postscript: Richard Williams has a thoughtful response to my post (even if he fails to provide a link) which you can read here.  His suggestion that Tredegar might place the statue in a “circus setting” is unpersuasive unless he can provide examples where this has happened in the past.  I’ve said this before and it bears repeating that Tredegar was not responsible for the placement of the Lincoln-Tad statue back in 2003.  The reason there is no historical marker explaining Lincoln’s racial outlook is because the statue was placed to commemorate his visit to Richmond in April 1865. It has nothing directly to do with race unless you want to explore how the black community received Lincoln.  This, of course, is quite different from Lincoln’s own evolving views on race.   As for how the Davis-Limber statue ought to be interepreted, Williams has this to say:

Williams would have us believe that this statue is best interpreted as a reflection of the benign side of race relations and slavery.  First, I agree with Williams that the statue ought not to be interpreted as “representative of the institutiton of slavery as a whole” – a narrow focus on Davis would be sufficient.  Visitors would need to know that Davis was a wealthy slaveowner who believed in white supremacy and served as president of a nation whose expressed goal was the preservation of slavery and the maintenance of white supremacy.  I also agree with Williams that the statue should not be interpreted as a conscious attempt on the part of Southerners to “dismiss the evils of slavery.”  That would be to mistakenly reduce all Southerners to one narrow position, which would dismiss the diversity of opinion over how the past is identified and embraced.  What I would say, however, is that it is reflective of how the SCV has chosen to remember the history of the antebellum South as well as the Confederacy.  Much has been written on the history and agenda of the SCV by such historians as Gaines Foster, W. Fitzhugh Brundage, Thomas Brown, Robert J. Cook, and Charles R. Wilson – most of whom were born and teach in the South.  To suggest that the commission of the Davis-Limber statue is not to be understood as an extension of that broader narrative/agenda is ludicrous.