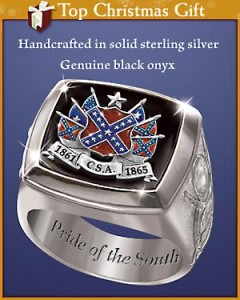 I came across this little tidbit in today’s NYT’s Media and Advertising Section. Apparently, American Heritage’s special issue on Abraham Lincoln includes an advertisement for the Bradford Exchange’s Civil War ring, which features a Confederate flag. I’m not quite sure what the editor finds so troubling about this or why it was necessary to include commentary from James McPherson and Eric Foner.

Mr. Grosvenor said he became aware of the advertisement, placed by the Bradford Exchange collectibles company, just before the magazine’s deadline and that he had to walk a fine line between generating revenue and maintaining editorial tone.

Perhaps it’s been a slow week in this particular department as a cursory glance of history magazines, especially Civil War, reveal a wide range of advertisements for Confederate-inspired products, from bras and bikinis to beer mugs, and bed sheets. The article alludes to, but never explores, the apparent conflict between a magazine devoted to Lincoln an an ad for Confederate schlock. Unfortunately, the opportunity to comment on the reasons for the pervasiveness of Confederate imagery, or the popularity of the Lost Cause was missed, even though both McPherson and Foner are qualified to discuss it. Instead, the two draw the reader’s attention to the controversial nature of the Confederate flag, while McPherson suggests that he would have spoken out had he known about this particular advertisement. Does McPherson really not know that most of the articles he has published in the pages of popular Civil War magazines are littered with such advertisements? That’s is a truly remarkable comment.