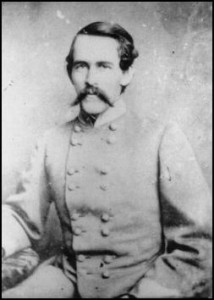 At some point in the next few weeks I am going to have an opportunity to rummage through an attic.  You may be thinking to yourself, “big deal”, but what if I were to tell you that the attic is owned by a descendant of Confederate Major General Robert E. Rodes?  It turns out that I happen to work with a descendant of the general, and the family is getting set to clean out an attic that contains a great deal of family documents and artifacts.  A few years ago the family shared with me a very fragile scrapbook that was owned by Rodes’s wife, who supposedly burned all of her husband’s correspondence following his death at the Third Battle of Winchester in  1864.  The scrapbook included a number of newspaper clippings following his death as well as public eulogies.  From what I’ve heard there are boxes filled with all kinds of documents from the Civil War period and beyond.  The family is pretty much convinced that the stories of the burning of his letters are true so there is little confidence that the attic will yield much in this regard.  Still, anything is possible.  It would be nice to find something about or by Rodes, but I am intrigued by other possibilities.  My job will be to help organize the materials and give the family a sense of what they have.  I hope to convince them to donate the collection to the University of Virginia so that it is properly preserved and accessible to researchers.

I know there is a new biography of Rodes by Darrell Collins, but I have yet to read it.  I’ve read a number of positive reviews, but nothing that really considers Collins’s methodoloy or his handling of primary sources.

I will keep you updated.