Today was the kind of day that I live for as a teacher.  My students and I had a wonderful time on our trip to Richmond. It was a bit cold, but we managed.  The highlight of the trip was the Lee statue along Monument Avenue.  We spent quite a bit of time looking at it from various angles and discussing both the pose of Lee as well as a Traveler.  It is indeed a beautiful monument.  I was also surprised by the interest expressed in the Jefferson Davis Monument.  It’s the perfect contrast with the reconciliationist message of the Lee statue.  There is nothing apologetic about the Davis statue and its assertion of states rights as well as other bits of Lost Cause symbolism.  From there we headed on over to the Arthur Ashe monument to discuss the fierce debate that ensued over its placement on the same avenue as Lee, Davis, Stuart, and Jackson.  As I was talking a passerby yelled from his car, “Tear it down.”  A few of the students were surprised and a bit disappointed, but it was the perfect reinforcement to my commentary, which emphasized the continued divisiveness over Civil War memory and who can claim rightful ownership of certain public spaces.  Unfortunately, we didn’t have time to hit the Lincoln-Tad statue at Tredegar, but we did take quite a hike through Hollywood Cemetery, which I thoroughly enjoyed.  All in all it was a great day and this particular group of students made it extra special.  Here are a few pictures from the trip followed by a poem that one of my students composed from each site.  All of the photographs can be found on my flickr page. 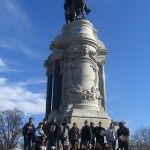 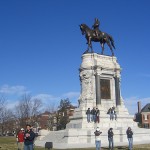 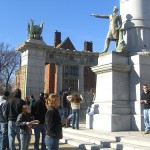 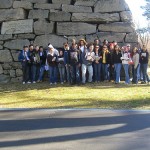 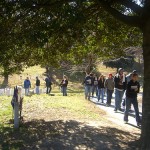 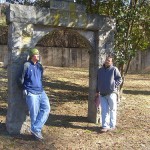 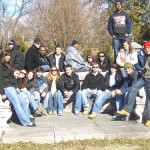 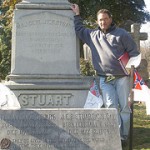 A General today still a symbol to many, ever proud and tall, he instills pride in any.  The cause disputed, different to all, and perhaps there’s still shock at the Confederacy’s “fall”.

An elaborate wall built to vindicate, the man in front, leader of states.  Praise to his army and written law of the land his hand opened up, he asks for respect yet remorse or apologies one should never expect.

Controversy caused by a monument to one, he fought his disease, a battle not conquered.  Yet instead of looking back at segregation, he fought to show his path towards a new kind of nation.

A river to one side with roads to the next, nestled between thousands laid to their rest.  Winding roads, past blocks of stone, bodies of many who fought for their homes.  Some fought in the East, and some in the West now all are together here laid to their rest.  Dates rubbed away and names never known, sacrifice, though, still not forgotten.

Next post: Why Does Hollywood Cemetery Need a Michael Shaara Memorial Bench?