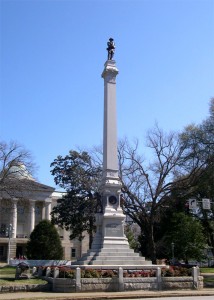 There is an interesting article in today’s Washington Post on the place of Civil War statues in a changing Virginia political landscape.  It’s a fairly balanced look at how these sites are interpreted by different constituencies and it directly addresses the connection between political power and how our public spaces are used to remember the past.  John Coski explains that connection in pointing out that, “A monument always testifies to power — to who was in power at the time.”  The Civil War statues that dominate Monument Avenue in Richmond and the soldier statues that populate local court houses serve as a reminder of white supremacy and a commitment to imparting to the general public a memory of the war that reinforced its preferred view of the past.  Such a view worked to reinforce political dominance through much of the twentieth century.  One wonders what the landscape of memory would look like if between 1880 and 1920 black Americans were able to take part in the decisions over who and what to remember.  How might Monument Avenue appear today under such changed circumstances?

I welcome the debate about how utilize our finite public space in commemorating and remembering the past; however, I worry about the tone that it has taken and will likely take as we approach the Civil War Sesquicentennial.  My biggest concern is the language of “tearing down” Civil War monuments that are deemed to be antiquated or even racist. Consider the recent controversy over a prominent Civil War statue in Raleigh, North Carolina involving a columnist who called for the newly-elected governor to tear it down. [Click here for the original column and here for a follow-up.]

I must remember that I approach these questions from the detached perspective of a historian interested in memory and public history and as a teacher who believes these sites need to be properly interpreted.  In other words, I understand that people are passionate about these issue.  The problem with the language of removal is that it fails to address some of the underlying issues that drive the discourse.  It’s ultimately a veiled attempt at covering up the problem rather than working to better understand it or, more importantly, working toward meaningful reconciliation over what the Civil War was about.  In the case of J. Peder Zane, however, it seems to me that all he managed to accomplish was to cause the various parties to dig in their heels even more firmly.  It leads to defensiveness and suspicion and renders it that much more difficult to engage in meaningful discourse. 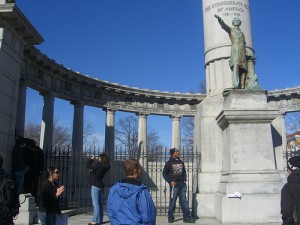 I recently took 30 students to Richmond to explore its Civil War heritage through monuments.  This was a fairly diverse group of students who have very different opinions as to what the war was about and how it should be remembered.  As we walked around the Lee and Davis monuments in Richmond and walked through Hollywood Cemetery we discussed and analyzed the sites and tried to better understand both the time in which they were constructed and their continued place on the public landscape.  Even with a diversity of opinion not one of my students suggested that the solution was to remove them from public viewing; in fact, most of them acknowledged in one way or another that it is important for them to remain where they are.

Public spaces are not static.  To understand this point is to acknowledge that they reflect the changing dynamics of the people who must live within their midst and, in many cases, maintain their integrity through tax dollars.  If that is the starting point than it is incumbent on the community to discuss in as open and as honest a way how these sites should be maintained.  I’ve tended to support at least two approaches in those situations when a monument or other structure no longer reflects the values of a substantial portion of the local population.  The most common approach is to add to the landscape as in the case of the Arthur Ashe monument in Richmond, but the approach taken in Louisville, Kentucky is also instructive.  In 2002, the University of Louisville announced plans to add civil rights monuments around its Civil War statue as part of a new development to be called “Freedom Park”, which will include structures commemorating the Civil Rights Movement.  Another way of bridging the divide between the commemoration of a statue and the present is to place interpretive markers that educate the public about the origins of the structure.  These do not have to be overly intrusive and can go far in placing the site in its proper historical context.  What I like about this approach is that it does not prevent members of the public from attaching their own preferred interpretation or meaning to the structure.  Perhaps the best example of this approach is the placement of an interpretive marker at the Heyward Shepherd Marker at Harpers Ferry, which was erected by the United Daughters of the Confederacy and Sons of Confederate Veterans in 1931.  [Click here for an excellent overview of the history of this monument and also see Caroline Janney’s recent essay in Civil War History (June 2006).]

I am not overly confident that rational discourse about how to remember and commemorate the Civil War in public spaces is possible.  Our culture is much too comfortable with a language of polarization that includes “Red States v. Blue States”,  “Capitalism v. Socialism”, etc.  Ultimately, we have to want to talk to one another or perhaps we must first learn how to do so.

Next post: Thinking About the Survey Course in a Post-Modern America

Previous post: “Is This the Union That Lincoln Was Trying To Save?”