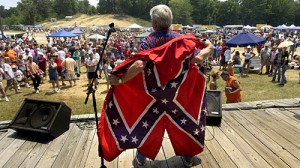 Can someone please send me directions to the cultural war between the Old South and the New.  Sorry, but interviewing the commander of the Sons of Confederate Veterans concerning plans to spread Confederate culture to every municipality in the country and including an image of some dude wearing a Confederate flag jacket as part of the 2006 Redneck Games doesn’t cut it.  How many people do you think Charles McMichael speaks for?  My guess is that the number doesn’t even appear on the radar screen.  Luckily, the reporter included an interview with a reputable historian:

Commemoration of the Confederacy as a noble cause began shortly after the Civil War ended in 1865, said Jonathan Sarris, associate professor of history at North Carolina Wesleyan College. The multicultural angle is an effort to appear more inclusive, he said, but it ignores the facts.

“To say that it is not racist but about multiculturalism is an attempt to adopt a modern mind-set,” Sarris said. “You can call it a victory for the forces of multiculturalism when even the defendants of the Confederacy feel they have to pay some lip service to the idea of tolerance.”

Sarris is absolutely right. [By the way, I highly recommend his recent study, A Separate Civil War: Communities in Conflict in the Mountain South]  The fact that the SCV has pushed toward emphasizing the multicultural “appeal” of the Confederacy is a sufficient indicator that even they have left the realm of the past for a mythical one that allows for continued identification and celebration.  It wouldn’t be a stretch to suggest that the SCV’s emphasis on their multicultural heritage makes them the hippies of Confederate remembrance.  Sadder yet is the reduction of Confederate history and symbolism to the kinds of games pictured above: bobbing for pigs feet, hub cap hurling and the Redneck mud pit belly flop contest.  Yeah, I’m sure that’s exactly how their Confederate ancestors hoped to be remembered.

There is no war over how to remember the Confederacy nor is there a cultural war between two Souths.  Sure, you can find pockets of partisanship here and there, but do we really believe that a substantial portion of the nation is aware of any of this or feels as if it has a stake in the outcome?

Previous post: Virginia’s Civil War Sesquicentennial is Off and Running