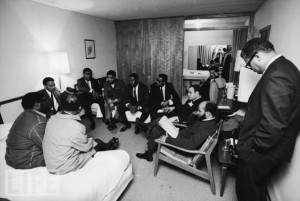 On April 4, 1968, LIFE photographer Henry Groskinsky and writer Mike Silva, on assignment in Alabama, learned that Dr. Martin Luther King, Jr., had been shot at the Lorraine Motel in Memphis. They raced to the scene and there, incredibly, had unfettered access to the hotel grounds, Dr. King’s room, and the surrounding area. For reasons that have been lost in the intervening years, the photographs taken that night and the next day were never published. Until now.

Next post: Capital of the Confederacy Remembers Lincoln’s Visit