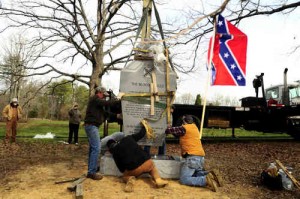 This weekend the Sons of Confederate Veterans from South Carolina unveiled a monument to McGowan’s brigade on the Spotsylvania battlefield.  The monument commemorates the fighting that took place at the “Bloody Angle” on May 12, 1864.  New monuments are barred from most battlefields, but the federal legislation creating the Fredericksburg and Spotsylvania National Military Park in 1927 permits states to continue to place markers on the field.  As of 4/12/09 there were two comments following the article:

1. The McGowan Brigade Monument is a fitting tribute honoring brave soldiers who died in a misguided attempt to subvert the Constitution and attack the United States of America. No one should misinterpret this monument as a tribute to the Confederacy.

2. Thank you for this well writen article. I enjoyed it very much. I realized how far from home our Confederate soldiers traveled in their attempt to preserve our Constitution in their 2nd War for Independence.

Next post: Should the SCV and Richmond Partner to Improve Oakwood?