Was That Really Necessary, Mr. Councilman? 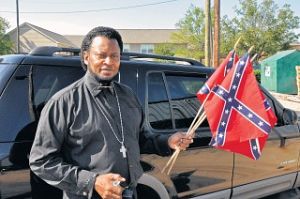 I‘ve said before that the best place to display a Confederate flag is in a museum where it can be properly interpreted.  It’s always surprised me that given the divisive history of this symbol that more heritage have not come out in favor of such a position.  To suggest that it ought to be interpreted simply as “Heritage, Not Hate” is to ignore much of the history of the mid-twentieth century and its use throughout the period of “massive resistance.”  Since this is unlikely we are left with a cultural tug-of-war that is unlikely every to be resolved.  Ideally it would be nice if various constituencies were able to be a bit more empathetic with other perspectives as a reflection of the multiple ways in which symbols are understood.  The SCV must understand and come to terms with the racist history of this symbol while the NAACP and others must recognize that not everyone who flies a Confederate flag is a racist who yearns for a return to the past.

Perhaps Auburn Councilman, Arthur L. Dowdell should have remembered this little piece of advice as he plucked from the ground a grave site full of Confederate flags, which had been placed by the United Daughters of the Confederacy in recognition of Confederate Memorial Day.

Dowdell said in his years as councilman, he had never seen so many Confederate flags in one place.  “I’m going on the record that this will never happen again,” Dowdell said. “This will never happen again as long as I’m on the city council.”  Dowdell denied intentionally snapping the flag.  “It might have snapped itself,” he said. “If it did, so what? If I had my way, I would have broke them all up and stomped on them and burned them. That flag represents another country, another nation.”

I understand the frustration, but was this the best way to express it?  Are we really to believe that this was the first time Dowdell noticed Confederate flags in a cemetery located just across the street from where his children attend school?  Finally, we should ask what Dowdell accomplished by pulling those flags and apparently snapping them in two.  Unilike most of us, Mr. Dowdell enjoys a public forum in which he can express his concerns about the state of his community.  He has a responsibility to use it wisely in the name of all of the people he represents. Use it wisely and use it to open constructive dialog rather than breed mistrust and bitterness.

Next post: Robert E. Lee Has Never Been So Cheap