Update as of 5/20: My contact at the NCDAH checked the Adjutant General’s “Roll of Honor” and did not find John W. Venable listed. This was a list (in no way complete) of soldiers serving in NC regiments compiled between 1862 and 1863 or ’64.

Update as of 5/19: So here is where we stand.  First time John Venable is listed in the census he is a free black in his dad’s household – Jeff (which I take it is Jefferson) Venable who is a blacksmith in 1850 and again in 1860 in Surry County.  in 1870, John is listed as head of household and a farmer – his brother is a blacksmith however and they are in Yadkin County.  Ten years later John is listed as head and a blacksmith and living in Yadkin.  Being in Yadkin explains the affidavit from Sawyer who was in Yadkin (explains as in makes sense geographically).

We still have a number of questions that need to be answered.  How do we reconcile the clerk’s statement – no law for this – with the Sawyer affidavit?  My contact at the NCDAH has this to say:

On the one hand the Clerk was obviously wrong in that John Venable, as far as we can track him, is free and not enslaved.  But lets look at the clerk – C M McKaughan in 1920 he is 42 – so born after slavery.  He may have no concept of what a free black man was.  It’s weak but nonetheless plausible, I think.  It might be his only defense – born in a post-slave world, of age at Jim Crow, does he know of such a thing as a free black.  Thus when confronted with a colored woman applying for a pension he thinks “slave” and dismisses the application.  I think it says nothing one way or the other about service – only about what the clerk knew or understood of days before his birth.

Sawyers statement is problematic as well in that we can not substantiate the claim.  The problem is that no records exist that list a John Venable, mullato, as a soldier.  Moore’s Roster includes no listing.  So, what can we reasonably conclude at this point?  For one thing, the clerk is obviously wrong.  The man John Venable (middle initial is H) who has a wife Sarah is a mulatto and is a free person of color in 1850 and 1860.  Sawyers’ statement stands alone and can not be substantiated, which means that we cannot conclude based on the available evidence that John Venable was a black Confederate soldier.

Let me be clear that I am not saying once and for all that John Venable was not a black Confederate soldier, just that the available evidence does not permit us to draw that conclusion.  Perhaps Mr. Ijames has additional documentation in this case.  If so, I urge him to bring it to our attention.  Unfortunately, this is how many of these cases end up.  Primary sources are collected and a conclusion is drawn without corroborating it with other evidence and without giving attention to the obvious, that documents must be interpreted carefully and that often there is more than one legitimate interpretation.  This should be a lesson to all of us.

In one of his comments Earl Ijames referenced the name of Pvt. John Venable of the 21st Regiment NCST, Co. H as evidence of a legitimate black Confederate soldier.  There was no explanation attached except for the following: “Colored. Enlisted on June 5, 1861.”  Without any additional information it was impossible for me to respond or take part in the kind of discussion that serious historians ought to entertain – until now.  If Mr. Ijames is unable or unwilling to bring about that kind of discourse than I will with a little help from my friends in the North Carolina Department of Archives and History.  I now have four documents related to Venable’s status in the Confederate army and quite a number of questions.

The documents include John Venable’s widow’s pension application. Unfortunately, I could not upload the second page of the pension application, but it does say, “disallowed no law for this” at the bottom.  The 1927 pension law that included former slaves made no provisions for their widows. The second document refers to him as a “good soldier” and the last document refers to Sarah as the “widow of a slave.”  According to my contact, John W. Venable shows up on the 1880 census in Surry County NC.  The census indicates that he was living with his wife Sarah, a daughter, and his occupation is listed as blacksmith. Venable could not be found in NC in the 1870 census and there appears to be no death certificate.

The published troop roster for 21st Regiment NCST, Co. H., lists a John W. Venable (no rank) and says this about his service: “Colored. Enlisted on June 5, 1861. No further records.” In compiling the roster for that company, the editors did consult some muster rolls. My contact spoke to one of the current editors (he was not around when they did the 21st Reg. volume) who suggested that if Venable had been found on one of the muster rolls, his entry in the published book would have indicated him present on that date.  There is a John Sawyers listed in 21st Regiment NCST, Co. H in the published roster, likely the fellow who provided the affidavit.

Here is where it gets very interesting.  There is no Compiled Service Record for John W. Venable on the NARA microfilm.  In addition, there are two other Venables listed in the published roster for Co. H. (A common name in that part of NC and the adjoining area of VA). My contact found them on the 1860 census, both of their families seemed to be on small farms.  The next move will be to look at the slave census and see if either of them had slaves.

This is why we have an obligation to ask questions and those who make claims have an obligation to back them up – nothing more, nothing less.  I don’t know whether this man was a soldier since we now have too many unanswered questions given the frequency of the name in the unit and the fact that there is no service record for John W. Venable.  As soon as I hear something more I will pass it on. 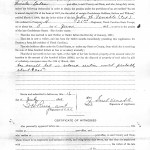 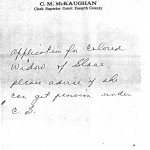 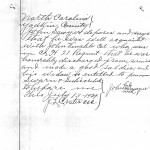