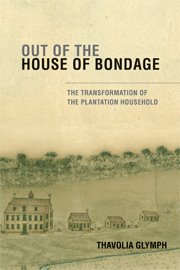 I‘m a little late in posting this, but wanted to point your attention to the three finalists for this year’s Frederick Douglass Book Award that is sponsored by Yale’s Gilder-Lehrman Center for the Study of Slavery, Resistance and Abolition.

The finalists are Thavolia Glymph for Out of the House of Bondage: The Transformation of the Plantation Household (Cambridge University Press); Annette Gordon-Reed, The Hemingses of Monticello: An American Family (W.W. Norton and Company); and Jacqueline Jones, “Saving Savannah: The City and the Civil War (Alfred A. Knopf Publishers).  The prize comes with a generous check of $25,000.  I’ve read both Annette Gordon-Reed’s book (a National Book Award winner) and Glymph’s study.  Although the publisher sent me a copy of Saving Savannah, I have not had a chance to look through it.   My money is on Glymph’s Out of the House of Bondage.

Next post: A Civil War Museum of Facts and Not Beliefs

Previous post: David Reynolds Reviews The State of Jones or Why Blogging Matters