Are You Sure You Are Waving the Right Flag? 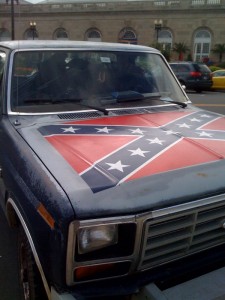 It seems strange to me that those marching and protesting in the name of limited government and states rights would choose a Confederate flag as one of their symbols.  We have Libertarian-leaning economists such as Thomas DiLorenzo and Walter Williams who celebrate the Confederacy and its leaders as the last bastion of limited federal power in the face of the Lincoln administration, which turned the nation toward “big government” with all of its inherent evils attached.  For these guys, it’s the beginning of the end.  [It’s also one of the best examples of stepping out of your field of study and looking silly.]  For most people who take part in political rallies such as the one this past weekend the flag represents the last stand of limited government, respect for individual and state rights and perhaps even a final gasp before the evils of modernity took hold.

Such overly simplistic distinctions may work well to reinforce our tendency to view the Civil War and much of the rest of our past as battle between good and evil.  On the other hand, it makes for some really bad history.  No one who understands the history of antebellum America could possibly make the mistake of drawing such sharp distinctions given the fact that it was the Southern states who were pushing for the power of the federal government during the 1850s to protect the institution of slavery through legislative acts such as the Fugitive Slave Act and court cases such as the famous Dred Scott decision. Northern states, on the other hand, insisted at times that states had the right to resist the Fugitive Slave Act by passing Personal Liberty Laws which effectively nullified the power of the federal government in their respective communities.

So, is the record of the Confederacy one of limited government and respect for individual rights?  The record includes: