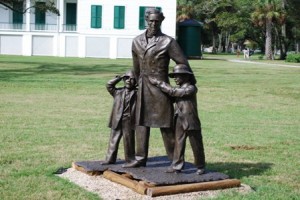 It looks like Gary Casteel’s statue of Jefferson Davis holding hands with his biological son and “adopted” son, Jim Limber, has found a new home at Beauvoir.  You may remember that this statue was commissioned by the Sons of Confederate Veterans in hopes that it would be placed next to the Lincoln statue at the Tredegar Iron Works.  That deal fell through and left the organization scrambling for alternative sites.  At one point they even asked the state of Mississippi to accept it.

Since the SCV meant to “educate” the public about Jefferson Davis and race relations during the Civil War with this statue, it is hard not to see this new home as reflecting nothing less than a complete and utter public relations failure.  The reason the statue ended up here has nothing to do with political correctness or any other catch-phrase that is currently en vogue.  It has to do with the fact that the statue has little to do with solid history and has everything to do with the current SCV propaganda machine which would have the general public see the Confederacy as part of some sort of civil rights movement.  I’ve written quite a bit about this particular story over the past year if interested.