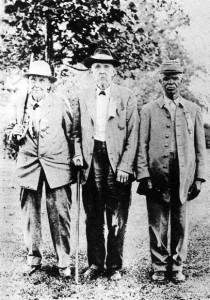 I‘ve been following this story out of Tennessee [and here] involving a local chapter of the UDC and SCV and their plans to honor 18 so-called black Confederates.  I was actually contacted by the author of this article for my position on this issue, which you can read.  The author does a pretty good job of presenting the various perspectives.  There is always the danger that the reporter will take something out of context or simply fail to follow a line of argument.  In this case the author, Skyler Swisher, does a pretty good job. The only thing I take issue with is having my view juxtaposed against Wood’s as two competing interpretations.  Simply put, Wood and the UDC are doing poor history.  There is really no interpretation to take issue with since it is fraught with basic factual and interpretive mistakes.

I would also like to clarify that I’ve never denied that the master-slave relationship could lead to mutual bonds of affection, though the nature of the relationship demands that we tread carefully.  That’s not the issue here.  My concern in these cases is that the SCV and UDC have gone to great lengths to honor these men for a role that they could never fulfill as slaves.  Almost all the cases of black Confederates turn out to be slaves following masters.  This necessarily implies coercion and ought to prevent us from describing their presence with the Confederate army as one of “service”.  What is it about the concept of slavery that certain people cannot grasp?  They did not serve nor were they soldiers and to imply that they were is to misread the historical record.  There is a reason why the VA denied markers for these black men.

Next post: Virginia’s Civil War Sesquicentennial Arrives in the Classroom