How Much for the Black Confederate? 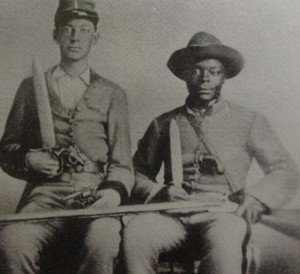 Looks like I missed a very interesting Antiques Roadshow last night.  A descendant of Andrew Chandler brought in the original famous photograph of his great-great-grandfather and slave, Silas Chandler.  The piece was assessed between $30,000-$40,000, by the very capable, Wes Cowan of History Detectives fame.  This is one of the more popular stories floating out there in the crazy world of black Confederates.  Silas Chandler is regularly touted as one of the best examples of a black Confederate who fought for the cause.  The standard “neo-Confederate” line can be found here [warning: turn the mute button off first] and you can even buy a Chandler Brothers t-shirt from Dixie Outfitters.  The transcript of the appraisal as well as a video can be accessed here.

I was a little disappointed with Cowan’s interpretation, though I guess it could have been much worse in different hands.  Cowan should have responded immediately to the following from his guest:

The gentleman on the right is Silas Chandler, his slave, or as we’ve always called him, manservant. Andrew Chandler fought with the 44th Mississippi Cavalry, as did Silas. They’re about the same age, joined the Confederate army when Andrew was 16, Silas was 17, and they fought in four battles together.

Silas did not fight with the 44th Mississippi.  He was a slave.  And Silas did not join the Confederate army when he was 17.  He was a slave.  Cowan correctly identifies Silas as enslaved, but then goes on to ask the following: “And Silas actually received a pension from the Confederate government for his service during the war, isn’t that correct?”  No, it’s not correct.  The Confederate government did not issue pensions; rather, veterans were able to apply for pensions from the states in which they lived following the war.  However, Cowan fails to mention that while some slaves did receive pensions this did not signify status as a soldier.  The viewer is left to wonder whether Silas was indeed a soldier. I know, it’s an excusable mistake, but in this case it makes all the difference.

We need to be careful when it comes to telling these stories.  We need to be sensitive to the military records when determining service as a soldier as opposed to simply throwing words such as “service”, “fought”, “joined” around loosely as is typically the case.  More importantly, we need to be careful about imposing our assumptions about the relationships between these men.  I am happy that the descendants of these two men are now close friends, but that has absolutely nothing at all to do with understanding the master-slave relationship through Andrew and Silas Chandler.  We need to take care of our history.