Summer Camp With the Sons of Confederate Veterans 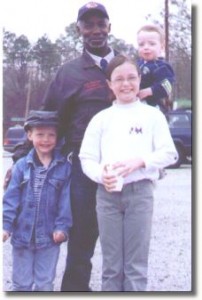 What do you do for your child after a full year of indoctrination in the public school system where they are taught that the Confederacy was evil and the war was about slavery?  You send them to Summer Camp with the SCV for a “true” history of the war.  According to an advertisement:

There is no question that the youth of today must run a terrible gantlet, and that many are struck down along the way by one or more of the politically correct influences which flourish in our schools…. Sometimes these youth are from the best homes with strong families and religious training. With even the most conscientious parenting, though, oftentimes (sic) in high school or college, even these best and brightest finally succumb to the liberal, politically correct view of history. This summer you can help turn the tide.

In addition to learning how to fire a cannon and parade/dance in period dress, campers learn lessons in the “Theology of the South During the War.”  Unfortunately, I don’t think the kids will be reading Eugene Genovese’s The Mind of the Master Class or Michael OBrien’s Intellectual Life and the American South, 1810-1860.  Rather, it looks like much of the time will be spent undoing the damage of being taught that slavery was somehow central to understanding what the war was about.  Perhaps the course will be taught by none other than H.K. Edgerton.

Specifically, the teens are exposed to the group’s contention that the Civil War was not about slavery, James said. Too many people have bought into that notion, he said, and wrongly exalt then-President Abraham Lincoln as wanting to end slavery.  Lincoln was “a bigger racist than I ever knew,” James said.  The truth is that the South was fighting for independence and the North was fighting to preserve the Union, James said. Slavery played into the tensions, he said, calling the practice “morally unacceptable.”  But painting the war as being primarily about slavery falsely gives the North the “moral high ground” and makes it seem as if Confederate soldiers were fighting to maintain slavery, James said. He said slavery eventually would have ended on its own, as it has in other countries.  “To attribute the war to something that wasn’t the cause isn’t right,” James said. “We try to tell it like it is.”

Rather than offer summer camp, I would suggest that the SCV organize their own schools.  This way children will be completely removed from the dangers posed by our public schools.

Let’s see, what would that curriculum look like?  For starters, Biology would be replaced with the course Stonewall Jackson taught at VMI.