Black Confederates in the Old Courthouse 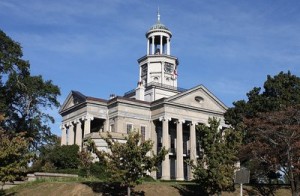 Special thanks to Robert Pomerenk, who took these photos of an exhibit on black Confederates in the Old Courthouse in Vicksburg, Mississippi.  It looks like a relatively old exhibit that was done with a very limited budget.  A quick perusal of these photos suggests that very little research went into this exhibit.  You will see the standard images as well as primary source accounts with absolutely no analysis whatsoever.  The exhibit is framed around the following assumption:

Dedicated to the faithful slaves, who loyal to the sacred trust, toiled for support of the Army, with matchless devotion and sterling fidelity guarded our defenseless homes, women and children, during the struggles for the principles of our Confederate States of America.

I’ve suggested that this debate ought to be understood as an extension of the central Lost Cause theme that assumes that slaves were faithful and had no interest in freedom.  This is one of the best examples of that point.  Yes, a book on this subject is desperately needed.