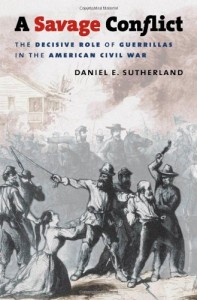 Those of you who attended the meeting of the SCWH in Richmond last month have already heard that Daniel Sutherland has been awarded the inaugural Tom Watson Brown Award for A Savage Conflict: The Decisive Role of Guerrillas in the American Civil War.  The award comes with a cash prize of $50,000.  Not bad.  From the press release:

According to George Rable, who holds the Summersell Chair in Southern History at the University of Alabama and served as chair of the prize jury, Sutherland’s book “shows the grim and gritty reality of the Civil War beyond the major battlefields and throughout both the Confederacy and border states.” In addition, the “engagingly written” book “reconfigures our understanding of the relationship between the battlefield and the Southern home-front” in a way that makes “a distinguished and lasting contribution to the field.”  The award announcement was made on June 19 at the SCWH biannual conference in Richmond, Virginia. Sutherland will formally accept the award and deliver the keynote address at the Society’s annual banquet at the Southern Historical Association in Charlotte in November. The award is funded by the Watson-Brown Foundation in honor of the broadcaster, philanthropist, and Civil War enthusiast Tom Watson Brown.

“It’s significant that in the inaugural year of the prize, the Watson Brown jury recognized not a book on a battle or a military leader but one that took as its subject the terrible toll of the war on ordinary citizens far from the battlefield and the role that irregular warfare played in undermining popular support for the war,” says UNC Press editor-in-chief, David Perry. “We’re immensely pleased for Dan Sutherland and grateful for the recognition that this prize brings to his important work.”

The book has also won the Distinguished Book Award from the Society for Military History and the Jefferson Davis Award from the Museum of the Confederacy.  I read this book when it was first published and can’t recommend it highly enough.  By the way, the last time I talked with Professor Sutherland he was working on a biography about James Whistler.

Next post: The Richmond Howitzers Were Integrated (well, not quite)

Previous post: Remembering USCTs at the Turn of the Twentieth Century