One of the richest sources for a black counter-memory of the Civil War is Ebony magazine.  Throughout the Civil War Centennial in the 1960s and beyond the magazine published articles that addressed the crucial role that African Americans played in Union victory.   No topic received more attention than USCTs.  You can view old issues through Google Books and it has proven to be incredibly helpful as I write about how black Americans remembered the battle of the Crater during this period.

One particular article written by Lerone Bennett Jr., (October 1975) about the battle of Chaffin’s Farm caught my attention.  In addition to Bennett’s text there are five sketches by Orville A. Hurt that add quite a bit of depth to the essay. You can find Hurt’s illustrations in multiple issues of the magazine. 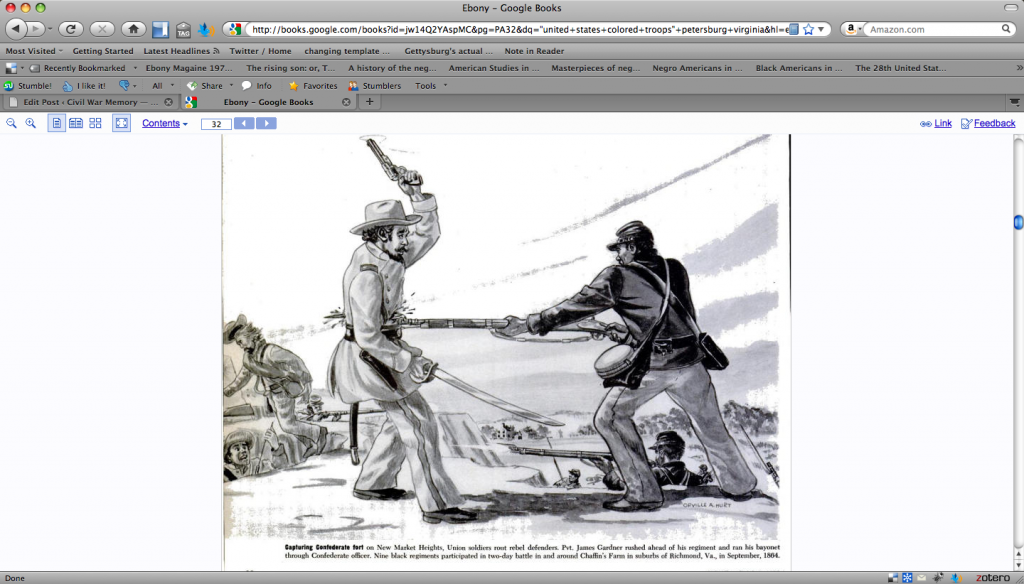 Hurt’s illustrations emphasize the bravery and manliness of USCTs as well as the sacrifice made on the battlefield.  The image above is by far the most powerful.  I don’t know if I’ve ever seen such a stark image of a black soldier plunging his bayonet through a Confederate officer before the movie Glory.

Next post: “[H]e Had a Great Reverence for the Constituiton”