“[H]e Had a Great Reverence for the Constituiton” 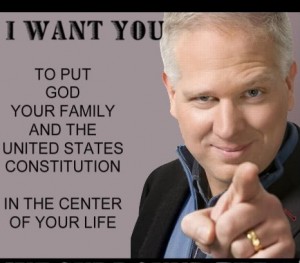 Every once in a while I tune into the Glenn Beck Show.  In a media world where conversations/interviews are much too short, Beck at least tries to dig into specific topics during his hour-long show.  I especially enjoy his Friday show, which in recent weeks has been devoted to historical topics.  History for Beck is part of his broader political-cultural world view that sees fascism, communism, atheism and every other -ism at America’s doorstep.  I am actually fascinated by his ability to weave a complex web that makes perfect sense if you accept just a few of his assumptions.  In the end, Beck is doing exactly what Father Charles Coughlin would do if he had access to the same media.  According to Beck America has been on this road since the Progressive Era.  I don’t claim to understand his particular historical outlook, but as far as I can tell every American president in the twentieth century, including Eisenhower and Nixon have contributed to this dastardly turn.  Well, whatever…enough with that.

This past Friday, Beck focused on the Progressive Period once again with particular attention on the racism of Woodrow Wilson and Margaret Sanger and a reappraisal of the “Robber Barons.”  Beck was joined by Burton Folsom Jr. and Larry Schweikart.  Neither is a serious historian and Schweikart is a complete hack.  You may remember a recent post of mine which critiqued a FOX interview with Schweikart, who made some ridiculous claims about the state of history textbooks.  [See here, here, and here]  At one point during the interview the subject of Abraham Lincoln came up along with the subject of slavery and the Confederacy:

BECK: If you want to learn the truth about history, sign up for Insider Extreme account at GlennBeck.com. Watch our special Friday features this week. Top liberal lies based on Larry Schweikart’s book “48 Liberal Lies.”

Back with us, Larry Schweikart and Burton Folsom, Jr. Before we go to Margaret Sanger, we were just having a conversation off-air because we were talking about this racist movie, “Birth of a Nation,” that was Woodrow Wilson, based on — I’m almost positive is based — what was the name of that book?

SCHWEIKART: “History of the United States.”

BECK: “History of the United States” by Woodrow Wilson. Just a racist Klan movie, that’s all it is.

SCHWEIKART: I like Lincoln a lot. I realize that he goes overboard in terms of many executive powers in the Civil War. You can justify those by war-time needs. But —

BECK: He gives them back. It’s like — it’s like Washington. He could be a tyrant but he gives — he restores the rights. And that’s important.

FOLSOM: No, I do. I think that he had a great reverence for the Constitution. He believed in natural rights. And as Larry was saying and you were saying, too, the problems that occurred in the war with the income tax, even a progressive income tax, the newspapers being denied civil liberties, even legislators being carted off and put in jail, even a congressman having his constitutional liberties violated. All of that was done away with after the war and the nation went back on a path of redeeming a lot of the war debt.

BECK: So, I think you guys are going for real — I mean, those are really good examples. The one I always hear on Lincoln is, well, that he was — I mean, he was — he got rid of the state rights. But I actually went down to the Civil War museum in the South and asked to see a copy of the Constitution. And they rolled out the real copy and I read it.

And that’s not about the state rights. That is about the slavery. Because you’re joining the Confederacy, you don’t have a right to drop out of slavery or tell anybody that no slavery. You had to participate in slavery.

SCHWEIKART: There are three separate clauses in the Confederate Constitution dealing with slavery. And one of them says that even if, say, Alabama opts out of slavery, it still has to recognize the right of Mississippians or Floridians to bring slaves into Alabama.

SCHWEIKART: So, it’s very clear what the document was about.

BECK: And it wasn’t even — it wasn’t just allowing slavery. It was re-establishment of the slave trade.

I have to say that I found this interpretation of Lincoln and the place of slavery within the Confederate experiment to be quite surprising.  I mean, where is the Lincoln the Tyrant theme that includes his abuse of the Constitution?  And in opposition to this tyrant image, where is the Confederate commitment to states rights?  Instead, we are presented with a much more moderate and, in my view, accurate view of Lincoln’s handling of civil rights during the war and a Confederate government that is committed to the preservation of slavery.  [Note: Beck does miss the mark on the slave trade reference.]

Finally, I don’t spend much time thinking about the FOX News audience, but I hear they are a fairly conservative bunch.  What do these folks make of these comments given the number of times that I’ve heard Lincoln’s name referenced on the channel as the best example of a president who abused his Constitutional powers?  I honestly thought that was the party line at FOX.  Very strange, indeed.  Perhaps someone can enlighten me.