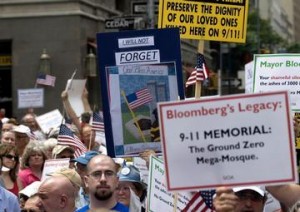 Like many of you I’ve been closely following the heated controversy surrounding the plans to locate the Cordoba Institute within a few blocks of “Ground Zero” in Manhattan.  While I have an opinion about this I’ve tried my best to maintain a safe distance from the debate in order to take in the broader picture.  Admittedly, such a step is difficult for me to maintain since I lost my cousin on 9-11.  Alisha Levin was 34 yrs. old and worked as a Human Resources manager for Fuji Bank in the South Tower.  She left a message on her parent’s answering machine to say that she was safe just after the first tower was hit.

For those of us interested in the emotion that often accompanies questions about how to commemorate historical landscapes this recent debate is instructive.  The lines between different historical memories are already well entrenched.  The many interest groups who lay claim to the site of 9-11 are also easily delineated.  Various stakeholders in this contest have already voiced positions on the architecture of the proposed new complex as well as a planned memorial for the site.  That an Islamic Center located 2-blocks from Ground Zer0 – as opposed to the schlock that has been sold on the actual site for some time – can generate such a response is also instructive.  It should come as no surprise that the debate has been defined by such passion given the nature of the attack, the scale of the destruction, and the death toll.  In my view every American has a stake in how the landscape is shaped in the coming years regardless of the legal and constitutional questions involved.

At the same time it is clear that the strong passions of those who claim ownership of this site are a function of different factors.  The families are moved by the memories and loss of loved ones; others are clearly using this issue for political purposes; and, a third group is driven as much by fear of Islam as they are by a sense of national loss and a desire to assign blame.  Of course, the spectrum of interested parties is much broader.  How our collective memory of this site will shift in the coming decades is anyone’s guess.  After all, it was probably difficult to imagine reunions between Japanese and American veterans of Pearl Harbor in 1941.  The passage of time shifts our focus as subsequent generations become more removed from the emotions of those who lived through the event.  With time we are able to explore aspects of a remembered past in a way that cushions still latent emotions.  At some point those emotions are more a result of choice than a direct connection to the generation that directly experienced some aspect of the event.  Even for those who experienced the event itself or as an extension of one of the victims the passage of time leaves the rememberer in a very different place.

This controversy has also reinforced my own understanding of the way in which certain people lay claim to our Civil War past.  You don’t have to look far for the passions that stir our personal and intellectual connections to the Civil War in reference to a public space or document.  I experience it first hand on this blog in the form of comments and private emails that express bitterness over something I’ve written.  Of course, I do my best to parse out the content from the emotion, and while I am interested in both I give much more attention to the former.  It would be a mistake to judge the emotion as right or wrong, but I do question its legitimacy.  I don’t believe that the emotion attached to people’s Civil War memory today ought to be understood as a moral claim on the historical event in the way that competing memories of 9-11 continue to do so.  The difference for me is the relative remoteness of the rememberer.  I find it difficult to pinpoint the psychological difference between the two examples, but I have a sense of what is going on here.  On the one hand the events of 9-11 are part of our lived history.  It’s a history that for many of us has left a void in the structure of our immediate families; even for those removed from the personal tragedy of the story it continues to give meaning to our lives and to the way we view the nation and rest of the world.  I simply fail to see how such a dynamic holds for descendants of Civil War soldiers (Union and Confederate) and the rest of the general population.  We may feel connected to some aspect of the war, but the overly moralistic tone and claims to an exclusive ownership of the past or even some aspect of the past is in my view completely unjustified. It’s what I understand when I hear: “Get over it.”  Perhaps a better way of putting it is: “Get over yourself.”

Next post: What Does Your Classroom’s Seating Arrangement Reflect?