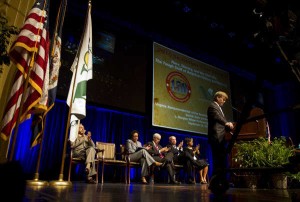 Unfortunately, I was not able to attend this year’s Virginia Sesquicentennial conference on Race and Slavery at Norfolk State University owing to a school visit by former First Lady, Laura Bush.  For those of you looking for some excellent commentary on today’s proceedings I urge you to head over to Jimmy Price’s blog, The Sable Arm.  I am sure at some point the conference proceedings will be made available, but one of the highlights has to be Governor McDonnell’s opening remarks in which he announced that he will not “move forward with a proclamation to claim April 2011 as ‘Confederate History Month.’  Instead, he will proclaim next year’s observation as ‘Civil War in Virginia Month’ as a way to settle longstanding disputes within the Commonwealth over its history as the former capitol of the Confederacy during the Civil War.”  The governor’s remarks were spot on and I especially appreciate the following:

In the century and a half since the armistice was executed at Appomattox, few states have undergone as many changes, or witnessed such stunning growth and progress, as our Commonwealth. Our borders have been fixed for 147 years; but our culture, community, and breadth of opportunity have been incredibly dynamic. These changes have made Virginia a stronger and better place.

But they have also made our collective “memory” — how our diverse society remembers and processes the events in its collective history — much more complicated.  In earlier times, Virginia’s dominant culture was defined by relatively few, and basic civil rights were excluded for many. Whatever the strengths and weaknesses of that culture, and both were present in abundance, as in any human enterprise – there was a common lens through which to view history. Those in power wrote a single, narrow narrative. It left out many people, along with their powerful stories.  And so, while talking about our history has become more complicated today, we can all agree it has also become a much richer conversation.

I couldn’t be more pleased with the governor’s decision as well as his incredibly thoughtful address.

Next post: Gather Around Children and Let Me Tell You a Story