Confederate Reenactors Are Not Nazis, but… 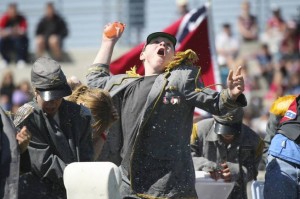 [Thanks to Ta-Nehisi Coates for the link.]

The ongoing debate about Republican candidate for Congress, Rich Iott’s hobby of portraying a Waffen SS soldier, raises a number of interesting questions about what we expect from people who choose to embrace the past through reenacting.  In the case of Iott, there seems to be little patience for the argument that one can reenact the soldier without acknowledging the government for which he fought.  Consider Iott’s attempt to distance himself from Nazi ideology:

I’ve always been fascinated by the fact that here was a relatively small country that from a strictly military point of view accomplished incredible things. I mean, they took over most of Europe and Russia, and it really took the combined effort of the free world to defeat them. From a purely historical military point of view, that’s incredible.

More recently, Iott had this to say:

I think that it’s an important thing to do because we need to constantly educate people and remind people about the tragedy that happened 70-some years ago…. A lot of time is spent talking to the public, setting up exhibits. It’s a way to keep the public aware of what happened and keep it in their minds so that we don’t forget…. They were doing what they thought was right for their country,” he said. “They were going out to fight what they thought was a bigger evil.

And the reenactment unit in question offers this as a justification, which I quoted in my last post:

Nazi Germany had no problem in recruiting the multitudes of volunteers willing to lay down their lives to ensure a “New and Free Europe”, free of the threat of Communism. National Socialism was seen by many in Holland, Denmark, Norway, Finland, and other eastern European and Balkan countries as the protector of personal freedom and their very way of life, despite the true underlying totalitarian (and quite twisted, in most cases) nature of the movement. Regardless, thousands upon thousands of valiant men died defending their respective countries in the name of a better tomorrow. We salute these idealists; no matter how unsavory the Nazi government was, the front-line soldiers of the Waffen-SS (in particular the foreign volunteers) gave their lives for their loved ones and a basic desire to be free.

Iott’s own justification for his reenactment preferences as well as his organization’s rationale for focusing on this specific unit can be seen in much of the discourse related to Civil War reenacting.  How often have we heard that it’s much easier to find reenactors willing to portray the Confederate soldier even outside of the South?  There is a lingering element of the Lost Cause that romanticizes the Confederate soldier as standing up against an overwhelming enemy as well as the continued insistence that the soldier be judged apart from the stated goals of the government for which he fought.

There is a blatant double-standard at work here between what we are willing to tolerate from Iott and his Nazi fetish and Civil War reenactors.  I’ve been to a number of living historian events and I’ve never witnessed an honest and sympathetic portrayal of a discussion of the tough questions of race and slavery.  Most of what I’ve seen focuses on the experience of battle and camp life.  And for those that do take on such issues we tend to praise for their honesty and bravery.  These rare instances can usually be found at museums and other historical sites.  Do we really expect reenactors from  Nathan B. Forrest’s unit to openly and honestly discuss what happened at Fort Pillow or the men who reenact in regiments that served with Mahone at the Crater?  When was the last time you heard a Union soldier discuss his racial attitudes after hearing that African Americans were to be recruited into the United States Army?  Even the movie “Glory” needed to bring the racist comments of a few white Union soldiers to a close as the 54th marched through the dunes in preparation for their final assault.

We don’t question these reenactors about their choice of uniform and interpretation and we certainly don’t question their own racial attitudes. From this perspective our collective outrage regarding Iott’s choices make little sense.  Some are emphasizing the distinction between reenacting a Wehrmacht as opposed to a Waffen SS member, but no one has argued convincingly as to why it matters.  As far as I can tell the distorted history of these men quoted above is just as prevalent in our Civil War reenacting community as well as our collective memory of the war as a whole.  For most Civil War enthusiasts the soldiers were apolitical and both sides fought for equally laudable goals.  My guess is that Iott is no more a Nazi sympathizer or an advocate of some of their methods than a Confederate reenactor yearns for the days of slavery.  The controversy not only reflects a blatant double-standard in the way we view historical reenactors, but reflects our continued belief in the exceptional quality of our own civil war.

Finally, I find it curious that most of us don’t for a minute wonder what all of this looks like from the perspective of black Americans.  Perhaps this double-standard is deeply embedded in our continued embrace of a “reconciliationist” and predominantly white memory of the war.

Next post: James Loewen on the Myth of the Lost Cause