Will There Be a Civil War Bicentennial? 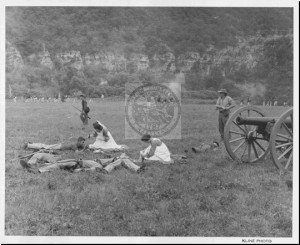 One of the highlight of this weekend’s meeting of the Southern Historical Association was the annual dinner for the Society of Civil War Historians.  This year we awarded Professor Daniel Sutherland with the first Tom Watson Brown Book Prize, which came with a nice fat check of $50,000.  The prize was for his book, A Savage Conflict: The Decisive Role of Guerrillas in the American Civil War (Civil War America)

, which is a must read.  A few years back I had the opportunity to work with Prof. Sutherland while he was a visiting instructor at the University of Richmond.  He gave generously of his time and offered to give one of my seminar essays on Confederate military executions a thorough review.  This award couldn’t have been given to a nicer guy.  In addition to the award itself, Prof. Sutherland was expected to give a talk, but rather than focus on guerrillas during the Civil War he chose to reflect on the Civil War Sesquicentennial.

Sutherland offered a rather gloomy view of the Sesquicentennial in comparison with the excitement that clearly animated him as a child during the Centennial.  Even with all of the media attention surrounding this commemoration I tend to share his skepticism, but our agreement ends with the assessment itself.  Sutherland seems to believe that the lack of- or waning interest in the Civil War can be attributed to a failure of our generation.  At one point he commented on the seeming lack of interest in history among our students as well as the increased distraction attributed to the Internet.  I cringe when I hear such uninformed analysis that adds to our tendency to blame everything on our kids.  Sutherland acknowledges that much of the early excitement during the Centennial was a function of the narrow focus on battlefield heroics and larger than life personalities that were completely cut off from any concern about broader issues of race and slavery.  At the same time, however, he seems to continue to grasp at the child whose imagination was spurred to action by American Heritage with its glossy maps and images.  At one point Sutherland asked whether whether the nation will take the time to commemorate the Civil War Bicentennial.

One of the first posts that I wrote on this blog was a brief reflection on the graying of our Civil War Roundtables, which flourished in the period following the Centennial.  It’s safe to say that their days are numbered.  The Centennial clearly had an influence on a generation of white Americans, but let’s not jump too quickly to a conclusion that sets them aside as some kind of “Greatest Generation.”  We would do well to understand the broader cultural and political forces that shaped the Centennial narrative and we should also remember their proximity to the war itself.  In the early 1960s there were plenty of people who had grown up listening to the stories of the veterans themselves.  That closeness matters.  We should also keep in mind the long-term consequences of the Vietnam War on our understanding of the nature of war and government.  Perhaps the excitement that Sutherland continues to recall about his childhood is a product of a unique moment in American history that is impossible to repeat.

I suspect that we won’t see the kind of resurgence of interest in the Civil War that we did in the 1960s and perhaps that’s a good thing.  Perhaps that kind of excitement wasn’t so good four our collective understanding of the war.  We should be thinking more critically about what the Civil War means to this generation and at this specific point in time.  And in 50 years I hope the nation does the same from its unique perspective and place in time.

Next post: The Civil War Centennial: A Personal Reflection