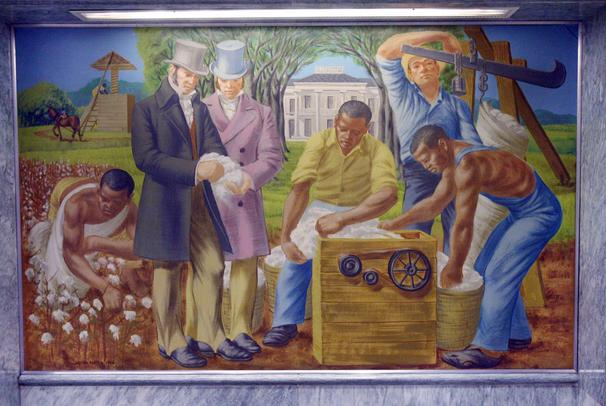 Here is another story for those of you who doubt that we are witnessing a radical shift in our popular perceptions of the Civil War and the history of slavery.  Gary Black, the newly elected agriculture commissioner in Georgia, has ordered that a series of murals depicting slavery be removed from the building.  The murals were painted in 1956 by George Beattie to show the evolution of agriculture in the state from Native Americans through the twentieth century.  I do hope these murals find a new home so they can be appreciated and even interpreted for their historical value.  According to the news story, Black is replacing a commissioner who occupied the position since 1969.

This shift in popular thinking about slavery is still, in my mind, best understood in terms of what it finds offensive or problematic.  The Lost Cause view of slavery, with its emphasis on paternalism, has already been put to rest by scholars and we can begin to discern the consequences of this from the controversies surrounding Governor McDonnell’s Confederate History Month Proclamation to the recent coverage of the sesquicentennial of South Carolina’s secession.   What is not clear is whether the next few years and a more rigorous engagement with the history and legacy of slavery will leave us with any lasting impressions.

On this day 148 years ago the Emancipation Proclamation went into effect and yet as a nation we do nothing to mark the occasion.  How strange in a nation that celebrates a narrative of the gradual embrace and expansion of freedom.