Not Really A Review of PBS’s “Robert E. Lee” 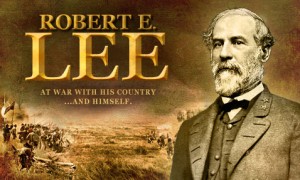 It’s nice to see that the latest installment [airs tonight at 9pm] of PBS’s American Experience on Robert E. Lee is getting its fair share of attention.  A few months back PBS mailed me a preview copy of the documentary.  In fact, I talked with producers of the show about three years ago and even suggested a number of the historians who were utilized as commentators.  Of course, I have no idea whether I was influential in their final choice.  I’ve read a number of very good newspaper and blog reviews and I tend to agree with the the overall positive consensus.  No doubt, the usual suspects will cry foul by accusing the producers of revisionism and political correctness; however, in the end, it’s a solid documentary based on the best scholarship.  I could quibble with some minor points, but that would miss the documentary’s target audience.  With the official beginning of the sesquicentennial there will be an increased demand for entertaining and serious documentaries and this one sets a high standard.

What I value about this series by American Experience is their commitment to ensuring that their programs are based on the latest scholarship.   Today I showed a bit more of the History Channel’s “America: The Story of Us” which included commentary from Brian Williams, David Baldacci, and Al Sharpton among others.  It was a complete joke.  Tonight you will hear from Gary Gallagher, Lesley Gordon, Peter Carmichael, Michael Fellman, Elizabeth Brown Pryor, and Emory Thomas.  All are talented historians.  I don’t have a direct line to the past.  Just about everything I can claim to know about the Civil War is from reading the scholarship of others and, in the case of Lee, from reading these historians.  In fact, apart from  my own research interest, I don’t really know how to engage in historical discourse apart from scholarship that I’ve read.

So, if you have recently been bitten by that Civil War bug sit back and enjoy this documentary and the next time you are in your local bookstore or Online check out one of these titles: