An Unremarkable Letter About Black Confederates

Thanks once again to Vicki Betts for passing along documents related to the controversial issue of black Confederates.  This latest gem is a letter from John C. Breckinridge’s cousin (Matilda Breckinridge Bowyer, of Fincastle, VA) recommending her son to recruit black soldiers, dated March 26, 1865.  What is so striking, however, is how unremarkable it is.  The document fits perfectly within the narrative accepted by professional Civil War historians and serious students of the war.  Not until March 1865 did the Confederate government authorize the enlistment of a limited number of slaves into the Confederate army.  There is nothing unusual about a mother with close ties to high political office, who attempts to advance her sons career following the passage of new legislation.

It is also worth commenting on what this letter fails to acknowledge.  At no point does Matilda Breckenridge acknowledge that slaves were already serving in Confederate units.  Nor does she suggest that her son had any experience with or prior understanding of the recruitment of slaves as soldiers.  In fact, I have never seen a letter written by a Confederate civilian, soldier or politician that points to the presence of a significant number of slaves serving as soldier in the Confederate army. 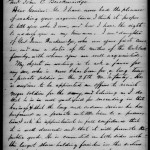 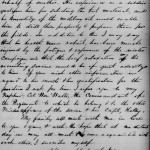 Next post: This Is Not a Southern View of the Civil War

Previous post: Stephanie McCurry on Power and Politics in the Civil War South