A Need To Remember a War To End Slavery 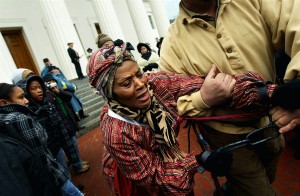 The other day I mentioned that a professor at Rice University used a few of my old posts on black Confederates as a way to focus his students on how Americans remember the war.  I thoroughly enjoyed the thoughtful comments of the students, many of which suggest that proponents of this particular narrative have a broader goal of embracing Confederate history – heritage without having to deal with the tough problems of race and slavery.  I think there is some truth to this, but I wouldn’t propose it as anything approaching a generalization or even as a sufficient condition.

In response to these comments, Professor McDaniel offered the following question and I have to say that I am struggling with it:

Second, many of you suggested that remembering the Civil War in a particular way fills certain needs people have–to absolve themselves or their ancestors of guilt, for example, or distance themselves from racism. This made me wonder (and some of you alluded to this): if remembering the Civil War as a conflict that was not meets certain psychological or cultural needs for the people doing the remembering, how does depicting the Civil War as a conflict that was about slavery, or even a war to end slavery, influence the identities or satisfy the needs of people who remember it that way?

It seems like an appropriate question given the slave auction reenactment that took place this morning on the steps of the Old Courthouse in St. Louis.  Here is a very interesting interview with Angela desilva, who took part in the reenactment.  [Click here for some powerful photographs from the event.] She offers a very personal response to Professor McDaniel’s question, but one that must acknowledge from a distance given my lack of any ancestral connection with slavery.

So, what needs does remembering a war to end slavery satisfy?  That’s a tough question and one that I don’t think I can answer right now.  I am tempted to suggest that it satisfies my need to know what happened and why, but that sounds shallow and could easily be suggested by those who minimize or reject the importance of slavery.  I’m sure others will opine that my radical liberal beliefs have left me feeling guilty or that such an interpretation fits into my view of the United States as fundamentally flawed.  Well, I hate to break it to you, but that’s not it.

Perhaps it relates to my Jewish upbringing.  Although I am no longer a practicing Jew I do believe that my strong belief that we have an obligation to remember flows from my experience in Hebrew School during my formative years.  It goes without saying that the Holocaust looms large in the lives of most Jews.  But this doesn’t fully satisfy either.  After all, I can remember the harsh reality of slavery without focusing on the Civil War.  In other words, I still don’t know what needs of mine are satisfied by remembering a war to end slavery.