An Analysis of Lincoln and Slavery by Joe Sixpack 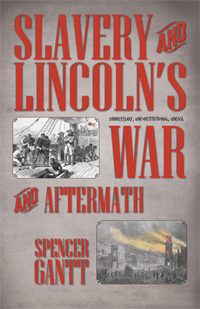 I have no doubt that this just scratches the surface of a vibrant underworld of Civil War related titles that cater to those who are looking to reaffirm their belief that mainstream and academic historians have sold their souls to political correctness and every -ism in the book.  Today I came across this little gem in my daily perusal through some of my favorite websites.  The book summary to Slavery and Lincoln’s War and Aftermath (Outskirts Publishing) is one thing, but get a load of the author description at the end.  It’s a classic.

Most Americans have tunnel vision when it comes to American slavery and the Civil War. There are facts about each that many of us have not read, have not been taught, and have not even imagined. Think about it. How many of us believe, for example, that the South started the war in order to retain slavery? Yet ninety-four percent of the southern population did not own slaves. Nor did they want slaves.  Slavery and Lincoln’s War will take you on the same enlightening journey author Spencer Gantt travelled after reading two seminal works: The Redneck Manifesto and The South Was Right! He presents you here with all of the facts, all equally weighed, so that you can make your own decisions as to what really is the truth about the North, the South, slavery and Abraham Lincoln.  Find out who trafficked slaves to the North American shores. Learn how the Union Army conducted a war against civilians. This book will shed new light on the complicity of many who have claimed to be “pure and without sin” when it comes to these two American evils, slavery and Lincoln’s war.

Gordon Spencer Gantt has no accolades, holds no super diplomas, has no pedigree of published writings to impress you with. He’s an average guy, a Joe Sixpak type of guy, and he has written this book from the viewpoint of the common man. He is a native of South Carolina, born in Pickens County, and he graduated from the University of South Carolina. He is a retired chemist and is married with three grown children and four grandsons. He’s also happy to be alive and to be a Southerner.