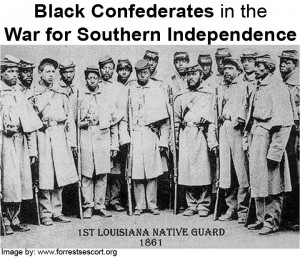 Brooks Simpson has chosen to wade into the mire that is the black Confederate “debate”.  In his most recent post he surveys a short list of the standard primary sources that have been used to prove the existence of black men in the Confederate army.  As Brooks notes, they are all problematic for any number of reasons, but at the end of post he offers the following:

But there does appear to be a pattern of distortion, deception, and deceit in the use of these pieces of evidence to make a case for the presence of African Americans in the Confederate army as willing participants in fighting for the cause of southern independence.

Why do you think that is?  What conclusions might we draw?  Could you explain why these examples are still used by people who claim a fidelity to historical accuracy?  After all, they offer no defense of their use of these examples in light of the information presented.  They simply continue to present the examples.

Deception is clearly involved in the case of the Photoshopped image of the Louisiana Native Guard, but the cut and paste references to Frederick Douglass, Lewis Steiner, Ed Bearrs, that populate so many websites beg for a different response.  I don’t even think that we need to fall back on the need to demonstrate that slavery was not central to the Confederate experience and the Civil War more generally.  In the end, what this reflects is an inability to engage in historical analysis.  I am going to sound like an elitist for saying this but so be it: Many of these people are simply not well read in the history of slavery, the social and cultural dynamic within the Confederate army, and the politics of the Confederate government.

Consider the following examples of how a few folks choose to define their terms:

“So what is the definition of a body servant?  A body servant is a gentleman’s gentleman.  These African-American men, whether freedmen or slaves, dedicated their lives to the service of men who in some form or fashion shaped the United States of America.  In 21st century vernacular the role is analogous to a position known as an executive assistant—a position today that requires a college Bachelors Degree or equivalent level experience.  Ask any salesman. You cannot secure an appointment with a senior executive without getting approval from his or her  executive assistant.” — Anne DeWitt

What is a black Confederate?

“A person of color whose heart and beliefs lie to the South. There are people who ask why Civil war headstones don’t stat that, the answer is the same reason modern day ones don’t. I would not count a minority who didn’t love the South for better or worse or during the war wanted to flee.” — Southern Heritage Preservation Group

“The definitions already offered as to what constitutes a black Confederate reflect my view: ANY person of color, that served the Confederate States in defense of their homeland – officially enlisted or not – if they in any way attempted to defend their Southern homeland against the illegal invaders (Union troops). I don’t know how you can be more definitive than that. Soldiers don’t just define those on the front lines (although there were many black Confederates in that position), they include all support troops as well. The guys on the front line could not perform their duties without those support troops. Those working in pistol factories as well, they were making the weapons for the front line personnel. That’s just common sense to me!” — Southern Heritage Preservation Group

“BLACK CONFEDERATES INCLUDE BUT ARE NOT LIMITED TO BLACK PEOPLE PAID PENSIONS BY SOUTHRON STATES AFTER THE WAR…….” — Southern Heritage Preservation Group

Most of these descriptions are so vague that they are meaningless.  What we have here is not a debate about whether free and enslaved blacks served as soldiers in the Confederate army.  The folks referenced above are not engaged in deception; rather, they simply do not understand the relevant history nor do they understand how to engage in historical analysis.