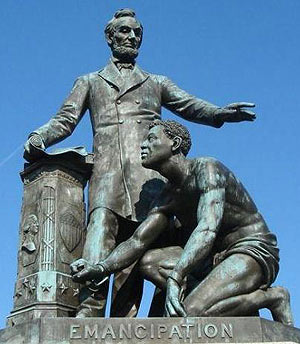 The American Studies class that I team teach just finished reading William Gienapp’s concise biography of Abraham Lincoln.  Of all the challenges that students coming to Lincoln struggle with is the issue of colonization.  It’s not simply that Lincoln advocated colonization before the war it’s the extent to which he pushed for it during the war itself.  It simply doesn’t mesh with the image of the “Great Emancipator” that many of my students come to class with.  The same holds true for my AP sections.  Luckily, the textbook that I use by Eric Foner does a first rate job with this particular topic. Understanding the steps that Lincoln took toward emancipation as well as the evolution of his thinking concerning race goes far to humanizing Lincoln and coming to terms with the challenges he faced during the Civil War.

Apparently, there is a new book set to be released that focuses specifically on Lincoln’s colonization policy.  According to a Washington Times review, “Newly released documents show that” Lincoln pushed for colonization, “to a greater degree than historians had previously known.”  I don’t know much about these new documents, but supposedly they show that Lincoln continued to push for colonization even after the release of the Emancipation Proclamation.  It would be interesting to know which slaves Lincoln was hoping to colonize; if I had to guess we are talking about those slaves in the border states.  I always remind my students that regardless of what Lincoln desired, African American leaders rejected his proposals.  Here is the book description:

Colonization after Emancipation: Lincoln and the Movement for Black Resettlement explores the previously unknown truth about Lincoln’s attitude toward colonization. Scholars Phillip W. Magness and Sebastian N. Page combed through extensive archival materials, finding evidence, particularly within British Colonial and Foreign Office documents, which exposes what history has neglected to reveal—that Lincoln continued to pursue colonization for close to a year after emancipation. Their research even shows that Lincoln may have been attempting to revive this policy at the time of his assassination.

Using long-forgotten records scattered across three continents—many of them untouched since the Civil War—the authors show that Lincoln continued his search for a freedmen’s colony much longer than previously thought. Colonization after Emancipation reveals Lincoln’s highly secretive negotiations with the British government to find suitable lands for colonization in the West Indies and depicts how the U.S. government worked with British agents and leaders in the free black community to recruit emigrants for the proposed colonies. The book shows that the scheme was never very popular within Lincoln’s administration and even became a subject of subversion when the president’s subordinates began battling for control over a lucrative “colonization fund” established by Congress.

That’s an interesting scenario that Magness and Page lay out, but let’s not get ahead of ourselves.  Consider the following comment by one of the co-authors:

The way that Lincoln historians have grappled with colonization has always been troublesome. It doesn’t mesh with the whole ‘emancipator.’  The revelation of this story changes the picture on that because a lot of historians have tended to downplay colonization. … What we know now is he did continue the effort for at least a year after the proclamation was signed.

I would love to know which historians are being referenced here.  And what exactly is the criticism?  The authors claimed to have uncovered new documents that change the narrative of Lincoln and colonization.  O.K., I get it, but that doesn’t mean that historians have downplayed colonization.  In fact, the very opposite is true.  The story is front and center in both the biography and textbook that my students read.  It’s present in just about every recent biography that I’ve read in recent years.  Sorry boys, but this is not news.  At least it’s not news to my high school students.

Finally, agree with Richard Williams, however, in that I would love to see some kind of interpretive plaque placed at the Thomas Ball statue.