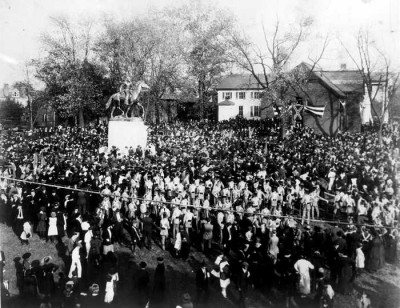 WHEREAS, the month of April is most closely associated with Virginia’s pivotal role in the American Civil War; it was in April 1861 that Virginia seceded from the Union following a lengthy, contentious and protracted debate within the Commonwealth, and it was in April 1865 that the War was essentially concluded with the South’s surrender at Appomattox. In the four years that fell between those momentous months, Richmond served as the capital of the Confederacy, and it was on Virginia soil that the vast majority of the Civil War’s battles were fought, in places like Manassas, Malvern Hill, Fredericksburg, Chancellorsville, the Wilderness, New Market, Cold Harbor, and Petersburg, locations now forever linked with the indelible history of this perilous period; and

WHEREAS, the largest wartime population of African-American slaves was in Virginia, yet through their own acts of courage and resilience, as well as the actions of the United States army and federal government, they bequeathed to themselves and posterity a legacy of freedom; and

WHEREAS, slavery was an inhumane practice that deprived people of their God-given inalienable rights, and the Emancipation Proclamation and the Civil War ended its evil stain on American democracy and set Virginia and America on a still-traveled road to bring to fruition the great promises of the Declaration of Independence, the Constitution, and the Bill of Rights, and ensure that all Americans have the opportunity to enjoy equally the blessings of liberty and prosperity; and

WHEREAS, the military leadership and tactics of Virginians like Confederate Generals Robert E. Lee and Thomas J. “Stonewall” Jackson and Union General George Henry Thomas are still studied, analyzed and discussed today; the heroism of brave individuals like William Harvey Carney, who was born a slave in Norfolk, gained his freedom through the Underground Railroad, and received the Medal of Honor for his valor as a Union soldier at the battle of Fort Wagner, inspires us through the ages; and the Commonwealth is the final resting place of thousands of Union and Confederate soldiers; the many cemeteries in which they lie reminding us of the cost and pain of the War and telling the stories of those who fought; and

WHEREAS, following the War, Virginia began the difficult process of returning to a nation that was, in many ways, born within her borders; that transition was aided by the actions of leaders like General Robert E. Lee who set the strong personal example of reconciliation and grace crucial in helping the people of Virginia return peacefully to the Union, instructing Virginians to “….abandon all these local animosities and make your sons Americans.”; and former Dinwiddie County slave Elizabeth Keckley who returned to Virginia as a guest of President Lincoln and expressed forgiveness and conciliation stating: “Dear old Virginia! A birthplace is always dear, no matter under what circumstances you were born”; and

WHEREAS, the General Assembly of Virginia created the Virginia Sesquicentennial of the American Civil War Commission in 2006 “to prepare for and commemorate” the Commonwealth’s participation in the war; and

WHEREAS, from 2011-2015 a diverse and growing Commonwealth will host innumerable public events, lectures, re-enactments, seminars, and remembrances covering every aspect of the war, and no state is more closely connected to this pivotal period of American history, and therefore no state is better suited to host visitors seeking to learn about the Civil War, the Confederacy, slavery, emancipation and the full history of our United States, and for that reason Virginia encourages visitors from across the country and the world to visit the Commonwealth during this period,

NOW, THEREFORE, I, Robert F. McDonnell, Governor of Virginia, do hereby recognize April 2011 as CIVIL WAR HISTORY IN VIRGINIA MONTH, and urge all Virginians to participate in commemorations of the war’s 150th anniversary and reflect upon the lives of the courageous men and women of those difficult times by attending seminars and conferences, and by visiting battlefields, cemeteries, exhibitions, historical markers, libraries, museums and historical sites throughout the Commonwealth, and by taking part in a diversity of events and activities that highlight our shared history and heritage, as we strive to enact the vision laid out in the preamble to the United States Constitution of “a more perfect union.”

Next post: A Civil War Proclamation For All Virginians

Previous post: Welcome to the University of North Carolina Press