Does Antietam Need a New Monument? 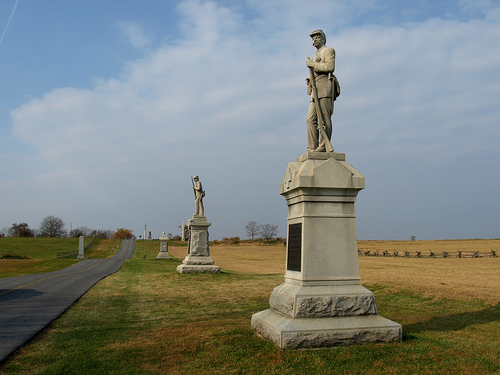 According to Brian Schoeneman it does.  That name might right a bell for regular readers of CWM.  On occasion, Brian has commented not so much on the content of my posts, but on my handling of various discussion threads.  Brian is a candidate for Virginia House of Delegates in Fairfax, Virginia.  Recently he toured South Mountain, Harpers Ferry, and Antietam with Scott Manning.  As a campaign promise, Brian promised the following:

I asked Brian if he was surprised at the lack of Confederate monuments. “Actually, I am. It kinda annoys me. There are about a zillion Union monuments here. Granted, the North took more casualties at Antietam, but they had more guys to lose.” He recalled one of the informational markers he read, “The Army of Northern Virginia lost about a quarter of their strength and the Army of the Potomac lost about an eighth. It was much harder for the South to replace those casualties than it was for the North.” Brian clarified that, if elected, he planned to introduce legislation next year to place a Virginia state monument on the battlefield in commemoration of the sesquicentennial. I pointed out that such a move could backfire if not done properly and he interrupted me, “There’s nothing political about recognizing that folks in the army of the state that I’m from fought here and died here. They deserve to be remembered regardless of what side they fought on and it bothers me there is nothing here, because I know there are plenty at Gettysburg.”

First, it becomes political the moment you couch the goal in the form of a campaign promise.  Such a promise also opens up a heated debate over whether the National Park Service ought to allow new monuments to be placed on the battlefield.  I know at one point there was a moratorium on additional monuments.  The Save Historic Antietam Foundation has been very vocal over the need to preserve the battlefield from continued encroachment, both in the form of commercial development and the ground itself.  Tom Clemens, who is the organizations founding member, has consistently spoken out again the placement of additional monuments as a form of preservation.

Antietam is by far my favorite Civil War battlefield.  It’s where I was first introduced to the subject back in 1994.  I for one would hate to see the battlefield overrun with additional monuments that reflect both legitimate themes of remembrance and more nefarious motives.

So, does Antietam need a new monument?