Update: Andy Hall has an interesting post up on the absence of any significant debate on the arming of slaves in Texas. Philip Dillard recently wrote an essay that analyzes the various factors that led to the debate in Virginia and the reasons why Texans failed to consider this crucial step. It can be found in Inside the Confederate Nation: Essays in Honor of Emory M. Thomas

, which is edited by Lesley Gordon and John Inscoe. 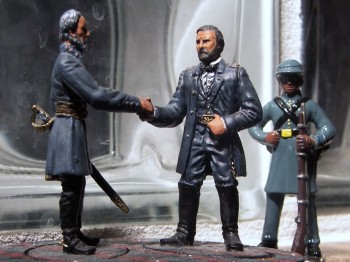 Resolved, That the State of North Carolina protests against the arming of slaves by the Confederate government, in any emergency that can possibly arise, but gives its consent to their being taken and used as laborers in the public service, upon just compensation being made.

Resolved, That North Carolina denies the constitutional power of the Confederate government to impress slaves for the purpose of arming them, or preparing them to be armed, in any contingency, without the consent of the States being freely given, and then only according to State laws.

Resolved, That his Excellency Governor Z.B. Vance be requested to communicate a copy of these resolutions to each of our Senators and Representatives in Congress.

I would love to be able to transport a group of modern day black Confederate myth proponents back to 1865 to discuss this issue with the North Carolina legislature.  Now that would be a real whoot.