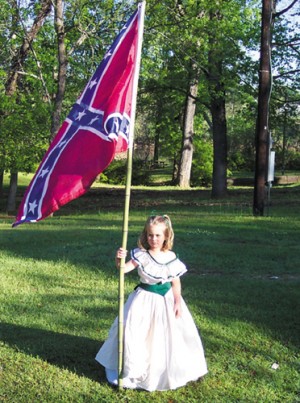 This looks to be a fairly interesting documentary.  Here is a brief description:

The Civil War may be long over, but the spirit of rebellion is hard to extinguish even in something as innocent as a girls’ summer camp. Southern Belle is an insider’s look at the 1861 Athenaeum Girls’ School in Columbia, Tennessee, where the antebellum South rises again. Every summer, young women from around the world eagerly sign up to become that iconic and romantic image of southern identity: the southern belle, replete with hoop skirt, hat and gloves, singing the region’s anthem, “Dixie.”  However, the camp can only achieve this version of Southern femininity by whitewashing the past. The teachers, all of whom work for no compensation, hope to instill genteel manners and build pride in southern heritage. To accomplish this, they have carefully selected the time period so they can share the “truth” with the next generation about why the South seceded from the Union. For them, the Civil War had little to do with slavery and everything to do with states’ rights and unfair taxation.

The film reveals why the stakes in teaching this romantic, segregated history are high. By promulgating a southern identity that erases emancipation as a cause of the Civil War and glorifies a disempowered female image detached from the brutality of the lifestyle that supported her, the camp ultimately reinforces divisions between race, gender, and geography in the present.  To understand the Athenaeum Girls’ School’s icon of the Old South is to better understand the issues that continue to define and divide America today.

I would much prefer to see a reenactment of one of the famous bread riots.