Scratch Off Another Black Confederate 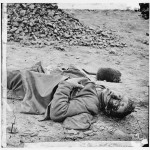 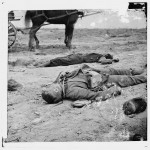 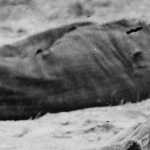 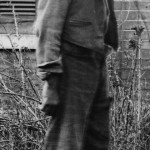 Update: Thanks to Andy Hall for sending along the link to the LOC page that includes a reference to David Lowe’s and Philip Shiman’s essay, “Substitute for a Corpse,” Civil War Times, Dec. 2010, p. 41.

One of the websites that I use in my teacher workshops on digital media literacy is a page from the Petersburg Express website, which is maintained by Ashleigh Moody.  It makes for an ideal case study of why teachers and students need to be educated about how to access and assess online information.  If you scroll down to the bottom of the page you will notice one of the best known photographs from the trenches of Petersburg.  It’s a photograph of a dead Confederate soldier, perhaps a member of an artillery unit.  There are at least two photographs of the body and one of them includes an additional body.  Moody refers to it as, “Black and White Confederate Soldiers.”

I have to admit that I’ve always had trouble with this image, particularly the identification of the second body as a black man.  I just didn’t see it and in my most recent workshop I even suggested that the identification of race by Moody was unjustified.  Not so fast.  Following my presentation Garry Adelman was kind enough to share a few additional photographs that I was unfamiliar with. Perhaps some of you are familiar with this recent discovery.  If you look at the third image you will clearly see that the individual is indeed black.  However, it is unlikely that this man was a soldier given the final photograph.  Apparently, this individual was used as an extra and if you look closely you will notice that the pants pattern match in both photographs.

I have no idea how Moody arrived at his preferred conclusion, but I am certain that it had little to do with anything approaching a critical examination of the relevant sources.  He properly identified the man as black and given his location next to a dead white Confederate concluded that he must be one of those black Confederate soldiers.  We’ve seen quite a bit of shoddy interpretation of late when it comes to this subject and this is just another example.

I am sure that Garry provided me with additional information about who put the pieces together, but unfortunately I don’t remember the remainder of the conversation since it took place after a long day.  Please feel free to add the details.  I would love to give the individual(s) credit for this.