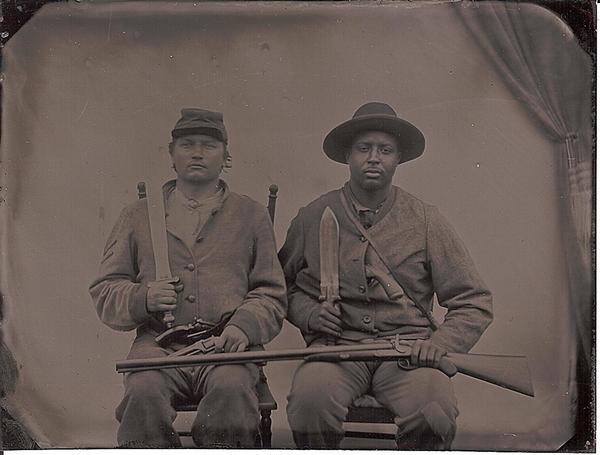 For those of you in the Boston area I will be speaking tonight at the North Worcester Civil War Round Table in Leominster. My topic is Silas Chandler and the myth of black Confederate soldiers.

Nice attempt at recreating the famous tintype of Silas and Andrew Chandler.  They almost pull it off except for the fact that the individual portraying Silas isn’t slightly hunched over in a subservient position.  The original image tells us quite a bit about the culture of slavery and antebellum race relations.  Myra Chandler Sampson (great granddaughter of Silas) shared her thoughts about the image a while back during our first phone conversation.  What follows appeared in that subsequent post.

“I was most interested in talking with Ms. Sampson about her thoughts concerning the photograph of Silas and Andrew Chandler.  Ms. Sampson mentioned that she owned a German Shepherd dog, which I thought was a strange thing to share until she added that posture is very important when handling this particular breed.  It should come as no surprise that a firm posture is essential to reinforcing the authority of the owner over the dog.  Looking at the image of Silas and Andrew I understand exactly what she means.  I never noticed it before, but Silas is clearly hunched over; remember he is seven years older than Andrew.  The image is not one of two childhood friends going off to war, but of a slave whose future now hinges on the boy next to him.”

Next post: History Detectives Tell Us What We Already Know

Previous post: My Travels With Silas and Andrew Chandler