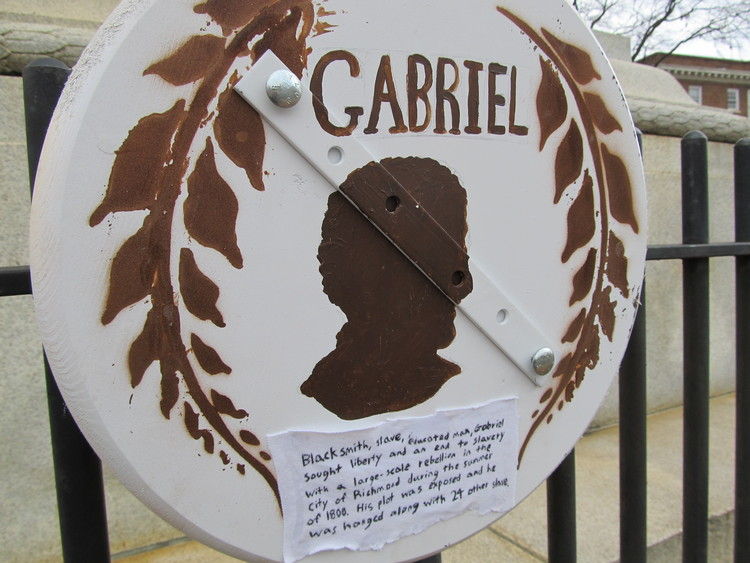 This week the local newspaper in my former home of Charlottesville, Virginia reported that the Lee statue had been vandalized.  I hope the perpetrators are caught and punished to the fullest extent of the law.  I spent countless hours in that park with my students interpreting the monument and using the park to better understand how and why we have a need to remember our collective pasts.

Today I learned that three statues on Richmond’s Monument Avenue are now adorned with “street art”, though the extent of the damage looks to be minimal.  Apparently, a local artist with a political bent decided to remind Richmond’s residents that the city’s past extends beyond the Confederate heroes that line this prominent street.

On the Stonewall Jackson monument is Gabriel.

“Blacksmith, slave, educated man, Gabriel sought liberty and an end to slavery with a large-scale rebellion in the city of Richmond during the summer of 1800. His plot was exposed and he was hanged along with 24 other slaves.”

On the Jefferson Davis monument is Barbara Johns, whose portrait is in the State Capitol building.

“As a sixteen-year-old in Farmville, VA John’s led a student strike in 1951 to protest racial segregation in her school. The resulting lawsuit became part of Brown vs. Board of Education, the Supreme Court decision ending segregation…”

On the J.E.B. Stuart monument are Mildred and Richard Loving.

“Interracial married couple, the Lovings were arrested and convicted in 1959, VA of miscegenation. They took their case to the Supreme Court, which in 1967 ruled in favor of the right for all Americans to have interracial marriages.”

As I’ve stated countless times on this blog, I have no patience for people who deface our public monuments.  At one time I may have been sympathetic with this type of alteration, but today there are numerous monuments and historical markers around the city that showcase its rich black past, including the Civil Rights Memorial located on the grounds of the state capital.  Like I said, I get it, but it just doesn’t have the same effect.