William Mahone and the Readjusters to the Rescue 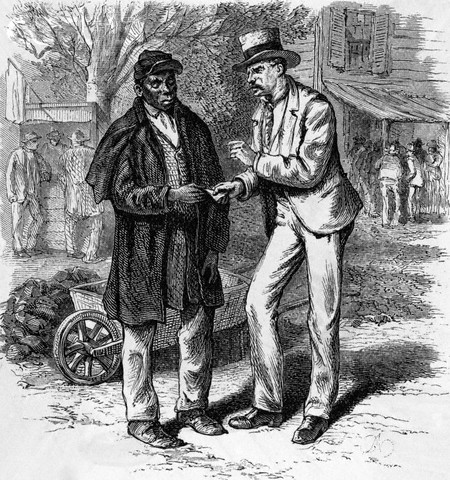 Looks like the Virginia General Assembly has been busy with resolutions about the Civil War era.  Last week I shared Sen. Henry Marsh’s resolution that would set aside a day to honor Abraham Lincoln and today I bring to you another resolution sponsored by Marsh that would honor black Virginians, who served in state government during Reconstruction.  The Senate committee approved the resolution and incorporated it by voice vote into SJR 13 Virginia Constitutional Convention of 1867-1868, recognizing African American representatives. The committee substitute was ordered printed and the resolution will now advance to the floor of the Senate.  I assume that for many Virginians this resolution makes more sense than one meant to honor Lincoln.  I tend to agree, but this resolution distorts a crucial moment in the state’s history.

Our standard narrative of Reconstruction goes something like this:  After the war the southern states were forced to re-write their state constitutions to conform to the 13th, 14th, and 15th Amendments to the Constitution.  In many of these states these changes were imposed by occupying federal armies.  Between 1865 and 1877 African Americans enjoyed a brief window of civil rights and political privileges that would not be seen again until the civil rights era of the 1950s and 60s.  The Compromise of 1877 left the southern states once again in control of their own futures and quickly instated a series of Jim Crow laws that left their African American population disfranchised and reduced to second class citizens.   In short, the black population was abandoned by the federal government.  This narrative has become so deeply embedded in our collective memory (at least in our textbooks) that we tend to assume that the end of Reconstruction led inevitably to Jim Crow.

WHEREAS, after the American Civil War, during the era of Reconstruction between 1865 and 1877, as a condition of readmission into the Union, former slave states were required by Congress to create reconstructed governments, hold state conventions, and establish new constitutions; in Virginia, African American men were given the right to vote for and to be elected delegates to the convention, and 25 African American men were elected to the 1867-1868 Virginia Constitutional Convention, which created the Virginia Constitution of 1869; and

WHEREAS, as a result of the resurgence of virulent racial discrimination that followed the Compromise of 1877, which officially brought an end to federal Reconstruction, Southern state governments enacted a system of laws known as “Jim Crow” laws, which established a rigidly segregated and legally sanctioned social system that subjugated and disenfranchised African Americans, again relegating them to second-class citizenship from 1877 until the mid-1960s; and

Virginia’s story, however does not conform to this broad outline and the conflict can be clearly discerned in the resolution itself:

WHEREAS, Virginia Memory states that, during Reconstruction, “across the South about two thousand African Americans served in local and state government offices, including state legislatures and as members of Congress. About 100 African American men served in the General Assembly of Virginia between 1869 and 1890, and hundreds more in city and county government offices or as postal workers and in other federal jobs“; and

One might reasonably wonder how African Americans remained in positions of power on the local and state level after Virginia re-entered the Union and even after the official end of Reconstruction in 1877.  Many of these men served during the four years of Readjuster control between 1879 and 1883.  Post-Civil War Virginia makes absolutely no sense without a reference to Mahone and the Readjuster Party, which was the most successful interracial third party in the South during this period.  It matters, not simply because it’s part of Virginia’s history, but because it has something important to teach us as well.

On the one hand Marsh’s resolution is refreshing and a step in the right direction, but unfortunately it is being framed in light of a history that has all but been lost.  In an unpublished manuscript on postwar Virginia written around 1910, Mason G. Ellzey reported to have heard “that General Mahone was greatly over-rated as a soldier.”  According to Ellzey, Mahone sought “credit for gallantry, and accomplishment in battle, which belonged to his fellow soldiers” and “some even went so far as to declare that he was an arrant coward.”  Even as late as the 1940’s, “the worst charge that could be brought against an [anti-Democratic] candidate was that he had been associated in any way with Mahone and the Readjusters.”  Few school-aged children were learning to appreciate the war record of Mahone and the legislative legacy of the Readjusters at the turn of the century and beyond.  Textbooks say very little about his involvement during the war and even fewer mention Mahone in the context of the debates that took place throughout the years of Readjuster control.

Memory of William Mahone and the Readjusters was consciously pushed aside owing to their connection with a brief period of interracial cooperation and black political advancement.  It is fitting to honor Virginia’s black politicians from this period, but we should do so in light of a narrative that does justice to its rich history.

[Note: Of all the things that I am hoping my forthcoming book on the Crater introduces to the general public, the history of the Readjuster Party and Mahone’s role stand out the most.]