What the SCV’s Defeat in Lexington Means 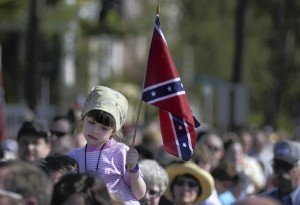 I suspect that the Confederate flag story out of Lexington will go viral by the end of the day.  No doubt, we will be treated to the standard mainstream media narrative of an unfinished Civil War as well as the overly defensive posture of the SCV.  Already we’ve heard from Brandon Dorsey, who is the local SCV commander in Lexington:

As far as I am concerned, this is little different that some states shutting down all their public schools to avoid desegregation and then claiming their motivation for closing them is of no concern because they screwed over everyone.

Oh brother.  Pass the hyperbole.  The SCV and other heritage groups have staked everything on the display of the Confederate flag.  It’s all or nothing.  Any attempt at limiting its visibility is seen as an attack on their history and heritage as if they alone have a monopoly on the Southern past.

The days when the Confederate flag represented a people, a culture, and a history are over.  Thankfully, we now live in a time when an ever wider spectrum of voices are able to make their voices heard and they are adamant that the flag ought not to be displayed on public property and/or supported with taxpayer dollars.  Why?  Because of its history and nothing the SCV or anyone else says or does can change the flag’s symbolic connection to a history of violence and racism.  I suspect that most reasonable people would agree that there are settings in which its display is appropriate and even necessary, but that is a discussion the SCV will not consider.

This has nothing to do with hating the South or “evilizing” the Confederacy.  That is as unimaginative an argument as one can make and as we have seen it will lead to the SCV’s continued marginalization in society.  The SCV’s decision to stake everything on the flag reflects a simplistic understanding of the very history and heritage that they claim to defend.  Instead of wasting limited resources on court cases, television ads, and airplane banners they should be thinking of creative ways to share the rich history of the Confederacy and their ancestors in their local communities.

When it comes to the Confederate flag the SCV is doomed to fail and they deserve everything they get.