Everything is Bigger in Texas 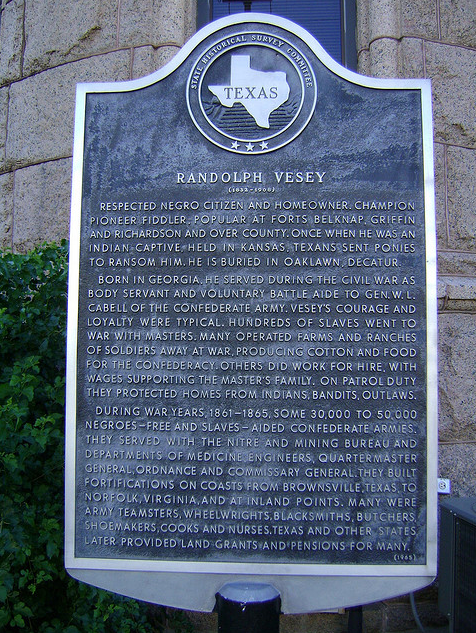 Even the number of black Confederate soldiers.  How many?  Norris White Jr. speculates that 50,000 men “served” in the Confederate army from Texas, though he has only “documented” 7,500.  Mr. Norris came across evidence of these black Confederates while working on an M.A. thesis on Buffalo soldiers in the history department at Stephen F. Austin University.  Along the way we get the same tired and confused statements that reveal very little, if any, understanding of the broader historiography and an inability to acknowledge crucial distinctions.

This is embarrassing on a number of levels.  The article itself is poorly written.  The history department at Stephen F. Austin is referenced in a way that I suspect it would correct if it had the opportunity, and Mr. Norris is clearly misinformed about the subject of how blacks were utilized for the Confederate war effort.  Let’s take a closer look.

“Their voices have been omitted from the pages of history,” White said.

This is simply not true.  There is an incredibly rich body of scholarship that explores the various roles performed by blacks in the Confederate army.

Much attention has been given in movies such as “Glory” and in books and articles written by prominent U.S. military and Civil War era historians to the exploits and heroics of black soldiers serving in the Union forces, White said, but he added that “very little observance, if any, has been given to their counterparts in the Confederate Army.”

This is a common claim made by folks who become fixated on black Confederates.  The United States army utilized black soldiers so there must have been a “counterpart” in the Confederate army as well.  What is lost in this move are the salient differences between the debates in the United States and Confederacy that led to their use as soldiers – in 1863 for the former and in the final weeks of the war in 1865 for the latter.  Even more to the point, it fails to acknowledge in any way the place of slavery in the Confederacy.

He found that black Texans served in the Confederate Army in many diverse capacities, such as infantrymen on the battlefield, personal body servants, teamsters or laborers.

This is where Mr. Norris and many others reveal their inadequacies as serious historians.  I have no idea how many black “infantrymen” or black enlisted soldiers were discovered, but body servants, teamsters, and laborers did not “serve” as soldiers.  These distinctions are absolutely crucial if one is to have any hope of making sense of this subject and it is completely lost on Mr. Norris.

Primary sources, White said, are “100 percent irrefutable evidence — letters, diaries, pension applications, photographs, newspaper accounts, county commission records and other evidence that give primary insight” that blacks were in the Confederate Army.  For example, White found a Texas historical marker in Wise County that states Randolph Vesey was a respected Negro citizen and homeowner who served during the Civil War as body servant and voluntary battle aid to General W.L. Cabel of the Confederate Army.

First, I am not sure how the discovery of a marker is the kind of example that you want to highlight after supposedly traveling “30,000” miles across the state searching through archives.  Randolph Vesey was surely not  a “counterpart” to any USCT.  One was free, the other enslaved.  That a graduate student in history will complete his studies not understanding this fundamental point is truly disturbing.

What I find sad is that even after all of this supposed research conducted by Mr. Norris, all we get here are the same old claims that are commonly found to have been cut and pasted from one black Confederate website to another.  There is nothing new here or anything that points to any serious thinking about this topic.  In fact, there is nothing in this article that you haven’t read hundreds of times in similar articles and countless websites.