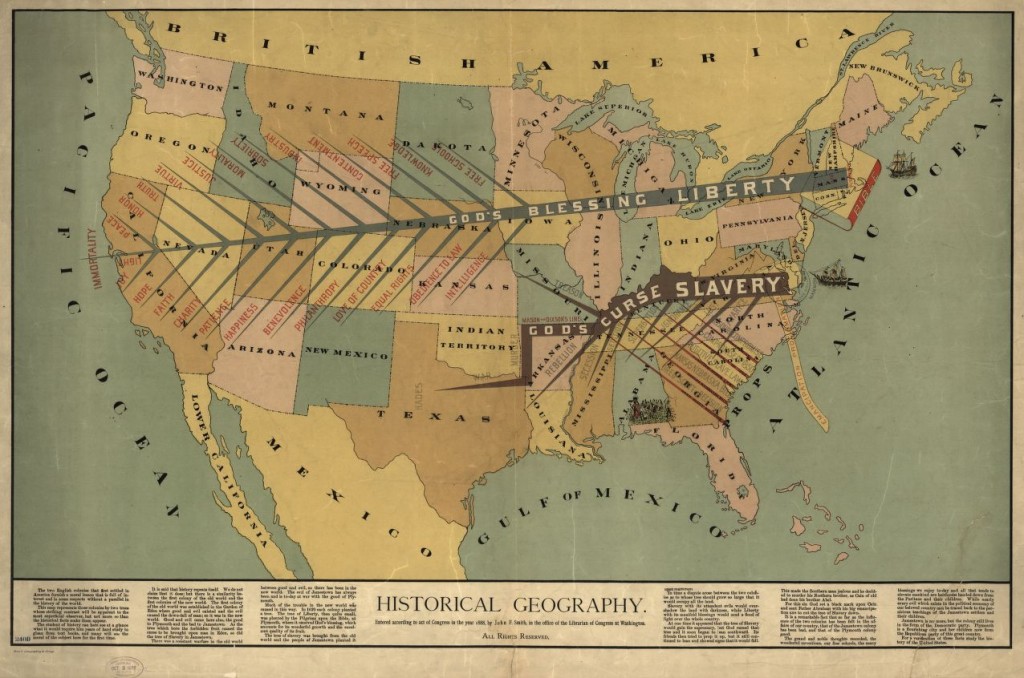 I am spending the day putting together maps for an animated video that will cover westward expansion and slavery from the passage of the Northwest Ordinance through to the Kansas-Nebraska Act of 1854.  Along the way I came across this wonderful map that was produced for Congress in 1888.   This is a wonderful example of selective memory in the post-Civil War period and a reminder that emancipation and the end of slavery constituted an important outcome of the war for many.  According to this map the eventual divide between North and South over slavery had its roots int he formation of both Massachusetts and Virginia.  The tree of slavery was planted at Jamestown in 1619; while the Pilgrims at Plymouth in 1620 planted a tree of liberty that would eventually stretch across the nation. The text at the bottom of the map explains the allegory and associates the Republican Party with the liberty tree. Here is a little taste.

In time a dispute arose between the two colonies as to whose tree should grow so large that it would occupy all the land.  Slavery with its attendant evils would overshadow the land with darkness, while Liberty with its manifold blessings would send a flood of light over the whole country.

At one time it appeared that the tree of Slavery would gain the supremacy, but God cursed that tree and it soon began to lean southward.  Its friends then tried to prop it up, but it still continued to lean and showed signs that it would fall.  This made the Southern man jealous and he decided to murder his Northern brother, as Cain of old had done his brother Abel.  For this sin God send a black mark upon Cain and sent Father Abraham with his big emancipation axe to cut the tree of Slavery down.

This would be an incredible classroom resource to introduce kids to issues of historical memory.  You can discuss the extent to which the map simplifies the history of slavery during the 250 year period leading up to the war.  Why was this map produced for the federal government and what did Republicans hope to do with it?  Why does the map not include any references to the existence of slavery in the north during the colonial era and right down through the early part of the nineteenth century?  How has this shaped and reinforced our own view of what the war was about and who we believe was right and wrong?