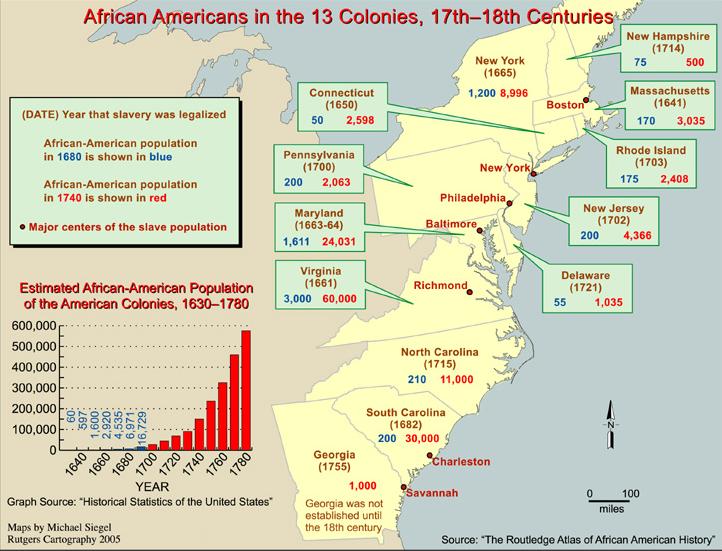 I didn’t realize that yesterday I stumbled on a relatively unknown map.  Hope it comes in handy for those of you in the classroom.  Brooks Simpson also posted the image on his site along with a very colorful explanation of the recent decline in Boston sports.  Thank you, Brooks.  One of the commenters on his site suggested that slavery in the North was insignificant.  I find it to be a widely-held view, especially with my students, who are likely offered a skewed view of slavery’s origin and growth at an earlier age.  My job is to correct it.

I find this map to be particularly helpful.  The first thing that students notice is that slavery was present in all of the thirteen original colonies.  Not only was slavery present in the North, it was expanding along with the South.  In 1680 New Jersey, New York, and Pennsylvania all contain a roughly equal number of slaves as North and South Carolina.  Of course, slavery expands in the South for a number of reasons having to do with the decline in indentured servants and demand for tobacco and other staple crops, but what is just as important is the rate of expansion in the North.  Twenty-Five years before the American Revolution there was no sign of decline in slavery in the North.  Speaking loosely, slavery was clearly a national institution.

There were, of course, important differences between the lives of slaves between these two regions as well as their place in society that must be noted.  I usually have my students read a short selection from Edmund Morgan’s American Slavery, American Freedom, in which he distinguishes between “a society with slaves” as opposed to a “slave society.” It’s an incredibly helpful analytical distinction and one that students easily grasp.

I’ve framed this year’s class around the essential question: What is American Freedom?  We are just getting started exploring the origins and evolution of slavery during the colonial period, but overall I’ve been asking them to reflect, based on their understanding of the concept, just how free people were during this time.  This map surely helps in that discussion.

Not quite sure where we should draw “God’s Curse” and “God’s Blessing” on this map.